Forever Three: Facing the Loss of a Child as a Military Family

by Guest Author
in Family, Life
0

Life as a military family has its challenges, but what happens when life hands you the unthinkable in the midst of moves and deployments?

Here is the Parker family’s story. Having a child with cancer felt like life in the military fishbowl times a million. They are sharing their journey so others know they are not alone. And so that we know how to better support our military families going through similar experiences.

Three months after my husband returned from a year in Iraq, our 2-year-old daughter, Sarah, was diagnosed with brain cancer. It was October 2007. We were stationed at Fort Knox at the time, and due to the severity of her diagnosis, we soon found ourselves at St. Jude Children’s Research Hospital in Memphis, Tenn. Because my husband was afraid he would not be able to give his job his full attention, he requested reassignment. He knew it would impact his career. 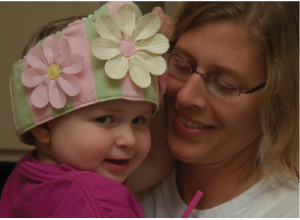 Being a military family, we had no close family nearby, so our mothers alternated visiting several weeks at a time to help with our two boys. Taking care of Sarah was a full-time job. We were very fortunate that the majority of our street, along with other friends who lived on post, were very supportive. They helped our mothers, organized meals, helped get the boys to activities, took video of them at events and sent them to me while I was in Memphis. But while we had great support, we also had a few people who could not deal with the situation. I never heard from them again. They simply avoided us after the diagnosis.

Our life now consisted of me traveling to St. Jude, where Sarah and I would spend one to six weeks at a time. The boys tried to carry on as normally as they could. St. Jude was very generous and provided medical care, travel, meals, and housing at no cost to us. Tricare was charged, but St. Jude accepted whatever Tricare paid and never passed any cost to us.

Sarah endured three brain surgeries, numerous procedures, chemotherapy, and radiation, but the situation remained grim. The stress on our family was high. As the months passed and Sarah’s prognosis did not improve, we requested a compassionate reassignment to Fort Benning, Ga. The move allowed us to be closer to family, and we could utilize Egleston Hospital in Atlanta as well as St. Jude. My cousin’s family overlapped at Benning for a month and they helped prep friends that we were coming. In our situation, moving to a new place with new people was difficult. It was hard to even relate to people.

We had so much going on with Sarah that the typical post-PCS meet and greet was strained. The people at Fort Benning were great. They brought meals, helped with the boys, and a friend brought over her daughter to play with Sarah. Despite all the help, we still felt alone. To feel connected, I kept in touch with new friends I had met at the hospital. I also connected with online parent support groups, which helped tremendously as they could relate to our situation.

On Nov. 13, 2008, six months after moving to Fort Benning and taking her on her Make-a-Wish trip to Animal Kingdom Lodge, Sarah passed away. At first, people felt uncomfortable when they saw us after her death, but the church was filled for her service as friends came from all over to be with us. Their support made me realize even though we often felt alone, we were never alone in our journey.

Sarah was a child who wanted to do things her way with a sense of humor. She handled almost everything with a smile on her face. She adapted to her limitations brought on by the brain tumor by using her feet to make up for the loss of her right arm and playing with my hair when she lost hers to chemotherapy. When she first became sick and could not walk she could only watch videos and she fell in love with Barney. No matter what people say about Barney, I will always love him because he made her laugh and smile. She did get to the point where she would only wear Barney shirts every single day. I tried to mix it up with other shirts but she would not have that. A highlight for her was meeting Barney privately in person on her Make-a-Wish trip. It was a spontaneous meeting and she was thrilled. Everyday I think of Sarah and miss her. While her life was short, she left an everlasting impact not only on her immediate family, but friends as well.

Being a military family and having grown up military, we had to decide what to do with Sarah’s remains. We did not want to leave her in a place we may leave and never come back to. The decision was made to cremate her. Sarah stays with her grandma and will be buried with the parent who passes first. We still go back to Memphis at least every other year for the Memphis Marathon weekend. We run in memory of our Sarah.

Military families who find themselves dealing with a friend in this situation can help with meals and have groceries delivered. Offer to do their laundry, clean their house, take the siblings to activities, or mow their lawn. Most families in crisis will not ask for help or may be so overwhelmed they do not know what they need. So instead of saying, “Let me know if you need anything,” be specific such as, “I will pick up dinner for you or I can take the kids to practice.”

Please do not tell someone you know exactly how they feel when their child passes away unless you had a child that passed away. As much as I love my parents and pet, comparing my child’s loss to a pet that passed or a parent who lived a full life is not the same. The death of a child disrupts the normal order of things.

When your spouse dies, you are a widow or widower.

When your parents die, you are an orphan.

There is no word to identify parents who lost their child.

Living With Both PTSD And ADHD as a Military Spouse