This Tillman Scholar Is Fighting for Better Autism Education

by Laurie Cowin
in Education
0

While completing her senior year of college in San Diego in 2002, Heather Barnett met Dwayne, an active duty Navy sailor. They fell in love and lived in San Diego for several years before being stationed to Italy, where they married in a small Sicilian town.

Heather had studied abroad in Florence in college – it was a coincidence she already knew the language. The young, child-free couple traveled all over Italy. Four weeks before leaving Sicily for Dwayne to attend school in Rhode Island and Virginia, Heather and Dwayne found out they were expecting their first child. Seven weeks after giving birth to their son, the young family moved to Japan and began what Heather describes as “a really difficult tour.”

Dwayne graduated from the Naval Academy in 1999 and was a surface warfare officer. Heather describes him as being kind, charismatic and highly intelligent while having a type A personality and being a perfectionist. Despite winning awards, being number one in his department head class and doing well overall, he still didn’t think it was good enough. Heather says he suffered from depression and anxiety, which was heightened by ship conditions incompatible with his personality. After a challenging tour in Japan, the Navy relocated the family to San Diego, scooping Dwayne up into what Heather describes as a safety net and giving him help.

Meanwhile, their son was 14 months old when they returned to the U.S. Because he wasn’t speaking yet, Heather met with a development psychologist, who did a four-hour assessment before diagnosing: “Your son has autism.” 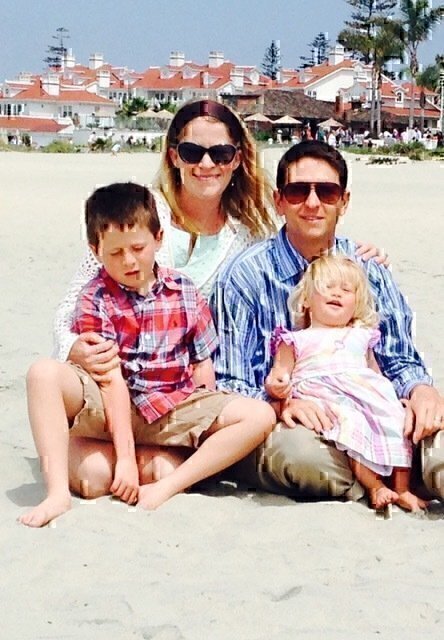 Heather, who by this point had a master’s degree and was a school counselor, decided to stay home with him and immersed herself in the five-days-per-week therapy sessions. Paralleling that time, Dwayne was thriving. Nine months after returning stateside, he was back on a ship as an operations officer with a phenomenal captain and crew.

Fast forward to 2012 when the couple welcomed a daughter. Between caring for a newborn and her son’s new classification as having heightened aggressive tendencies, Heather was consumed. When Dwayne was screened for commander, he was assigned to a different ship with an atmosphere that resembled Japan’s experience.

“We had hit a point where we thought everything was okay again, but it was still fragile,” she says. “I was somewhat unaware of how stress was taking a toll on him; he internalized so much.” Nonetheless, he continued doing his job, and she continued with hers as mother to two.  In May 2014, Dwayne committed suicide.

Heather felt blindsided. Survival in the first year was a matter of putting one foot in front of the other. “I had to figure it out, nobody would do it for me,” she says. “I’m a Navy spouse who had been dependent on a military man for a long time.”

Pursuing an advanced degree crossed her mind while contemplating her options. “I was thankful for the education I had behind me already and knew I had to do something with what I knew and experienced with education and autism. I felt like I needed to make a bigger difference. These military families need more help than what we’re getting,” she says.

PCSing Through the Eyes of a Preschooler