7 Ways to Expect the Unexpected During Your Next PCS

by Military Spouse Team
in Moving
0

The term “PCS” is just shy of being a “four-letter word” to a military family. You learn quickly to expect the unexpected. When you hear that it is PCS time for your family, there is nothing that induces fear faster, except maybe a deployment…Or maybe not even that.

Whether you have moved a dozen times (in which case you have earned our never-ending respect), or are anxiously anticipating your first move (in which case we feel for you and are here if you need anything (See this PCS Move article for help in deciding what to pack!), PCSing is one moment everyone can agree comes with mixed emotions.

Now I’ve been excited to leave a duty station, but that isn’t the same as being thrilled to move all my (precious) belongings across an ocean, two states and multiple cattle guards. Because when it comes to moving with the military, only one thing can be counted on for sure: expect the unexpected. Below are seven of the “unexpected” moments you can count on during your PCS experience. Don’t say we didn’t warn you…

1. The movers will be late (or really, really early… if they come at all.) 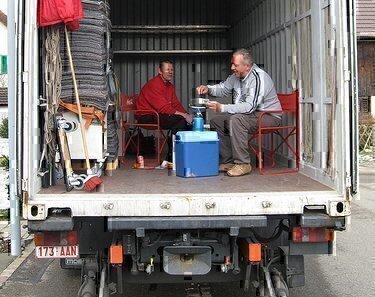 Again we say, expect the unexpected. You are a professional by now. You’ve got a binder filled with dates, labeled tabs highlighting every rest stop along your trip, a packing list that would make Princess Kate’s assistants jealous, and still, you can’t make movers show up on time. They don’t know you have pizza, soda, and air conditioning in 29 Palms in the dead of summer or they’d be there…right?! Wrong. Without a doubt, but with a million excuses, the movers will not be on the same timetable as you are. Plan to let go of your plan a little when it comes to this. And don’t order the pizza until they show up.