Army spouse Karley Deck emerged from a dressing room in a brown taffeta gown, its bodice sparkling with delicate gold beads. She’d come to Operation Deploy Your Dress, a non-profit founded at Fort Bliss, to select a gown for a formal event.

“Does this look all right?” she asked. 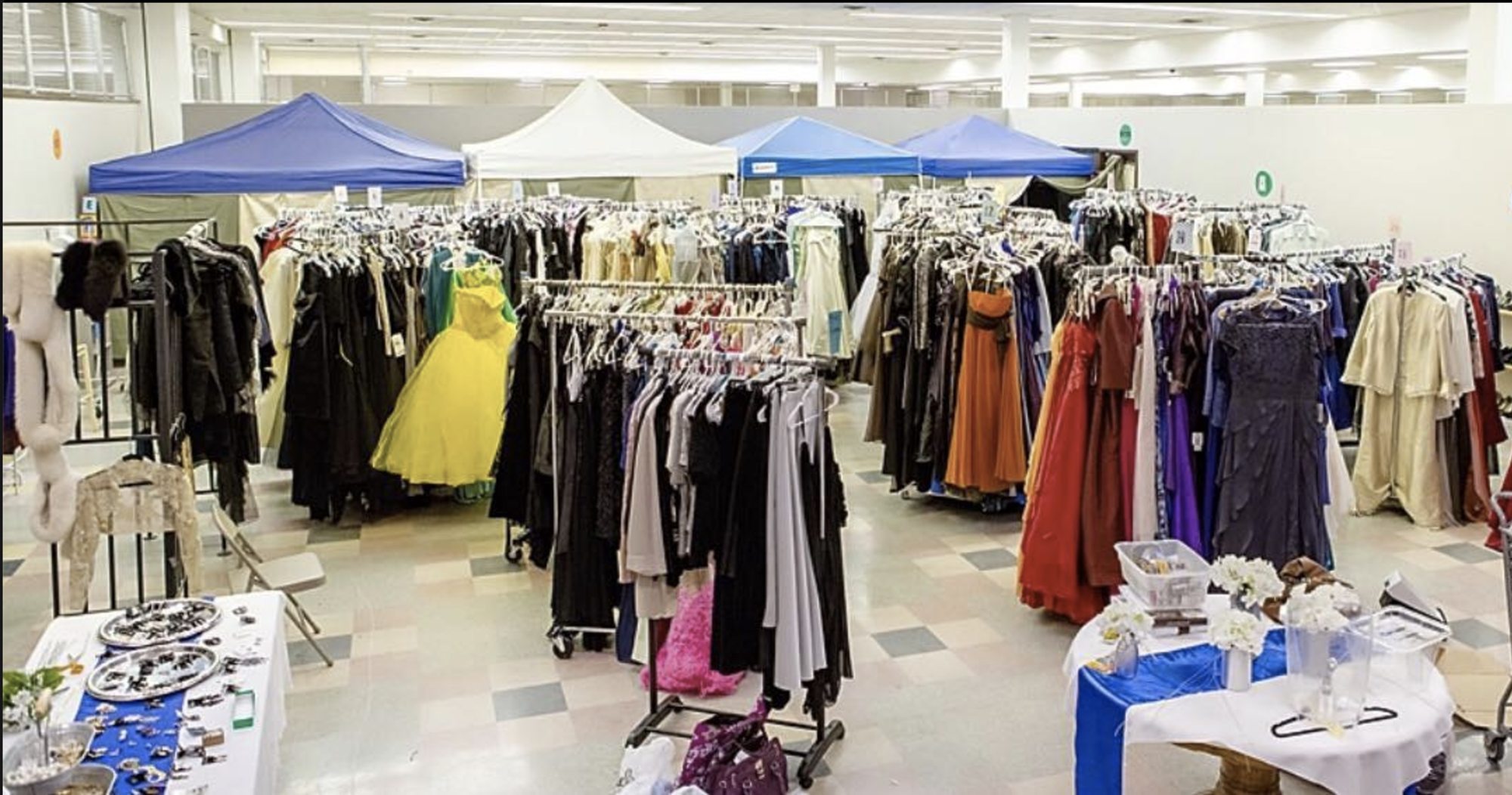 Immediately, three other Army spouses – Liz McKenrick, Renee Chapman, and Ronya Rendon – ooh’d and ahh’d over Karley’s selection, commenting on the way the gold brought out the highlights in Karley’s hair. Karley’s eager smile and grateful hugs suggested she might just start twirling, which her three admirers would likely encourage.

After all, helping military spouses find gorgeous dresses was why they were there. As the founders and original members of Operation Deploy Your Dress, they’d organized an effort to provide formal gowns and accessories to military servicewomen and spouses for free. 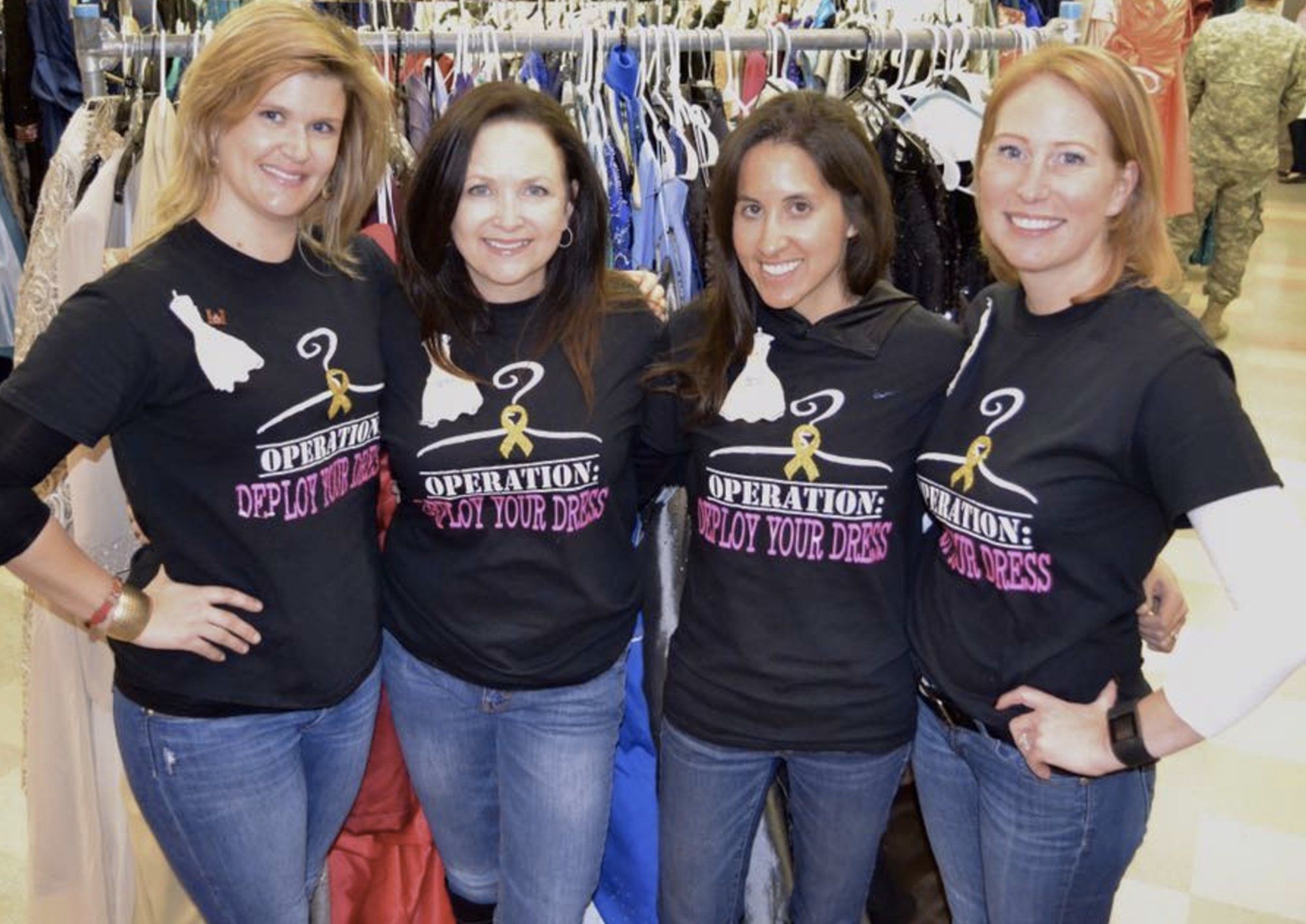 ODYD began at Fort Bliss just one year ago, when founders Renee Chapman, Ronya Rendon, Yvonne Coombes, and Melissa Riely decided to organize a dress swap among their units’ spouses, as a way to defray the costs associated with purchasing formalwear for holiday balls.

It wasn’t long before the idea became an organization, run entirely by dozens of volunteers. With the support of Fort Bliss’ Garrison Command and the Fort Bliss Spouses’ Club, ODYD set up a location next to the Thrift Shop. Soon, other installations expressed interest, and within one year, ODYD opened at Fort Eustis, VA, and Joint Base Lewis-McChord, WA.

ODYD is now a well-organized store, albeit one that “sells” its goods for free. Military servicewomen and military spouses can come to ODYD and select one dress and one accessory per year. They simply need to present their military ID card and sign the record book, and they can walk away without spending a dime. 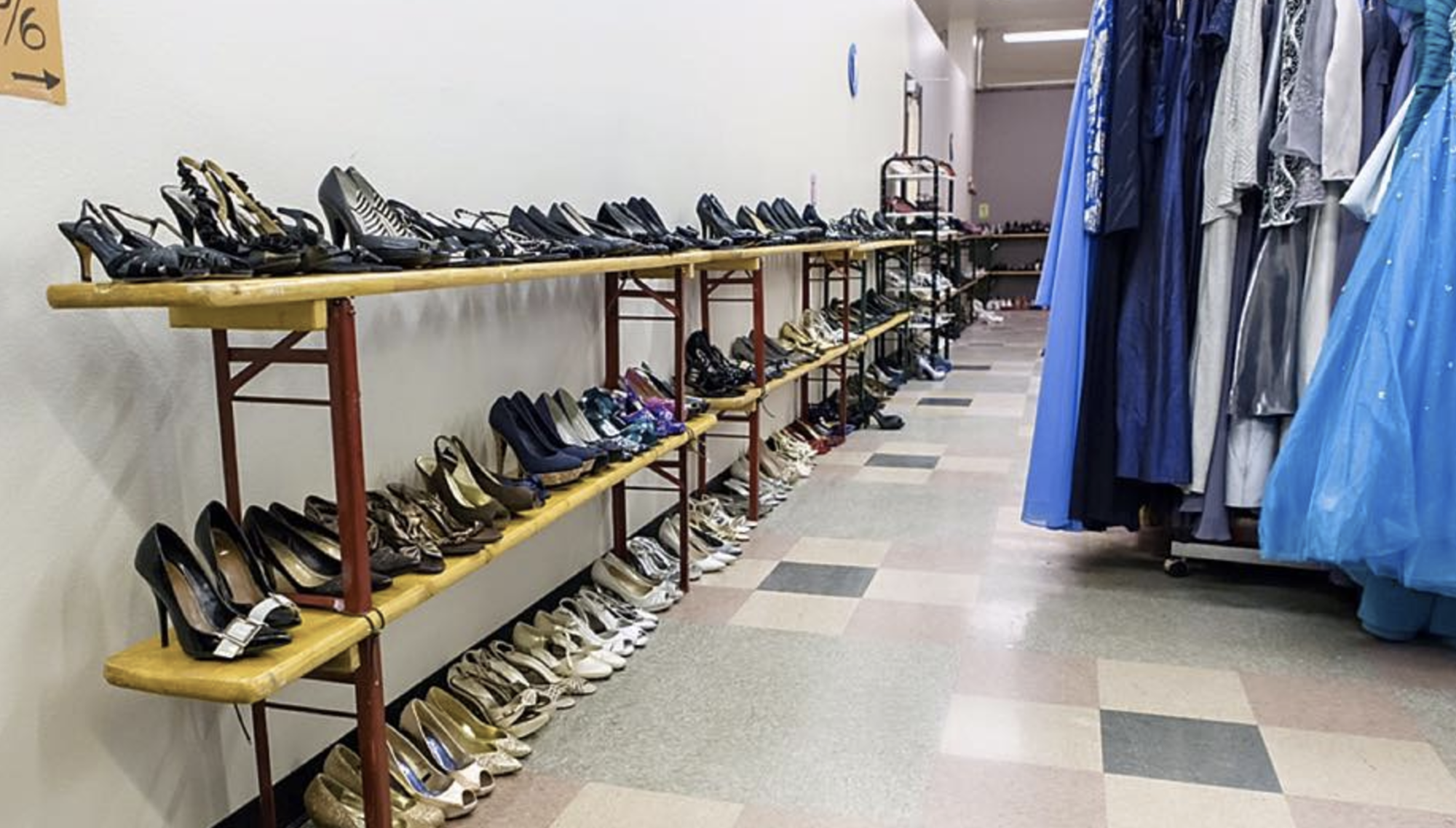 “It’s never a drag to come here,” Renee said. “Even after a year, I still walk in here and it takes my breath away.”

Indeed, Renee and her partners were overwhelmed by the outpouring of interest and support once they launched ODYD.

“We were thinking, maybe we’d get a hundred dresses,” said Ronya. “But then people were so generous. One snippet of news, and it spread like wildfire.”

ODYD’s spot on Fox News in December 2015 garnered enough attention that some figures from the news and fashion industries donated a number of high-end dresses and accessories. Before they knew it, ODYD received thousands of dresses from all over the country.

Perhaps more touching are the letters that accompany a lot of the dresses. Many women look at their formal gowns with sentimental eyes, recalling happy occasions and cherished memories. It can make it hard to part with them. However, ODYD has been moved by women who write that they would like nothing more than for a military spouse to wear their dress and make more happy memories. 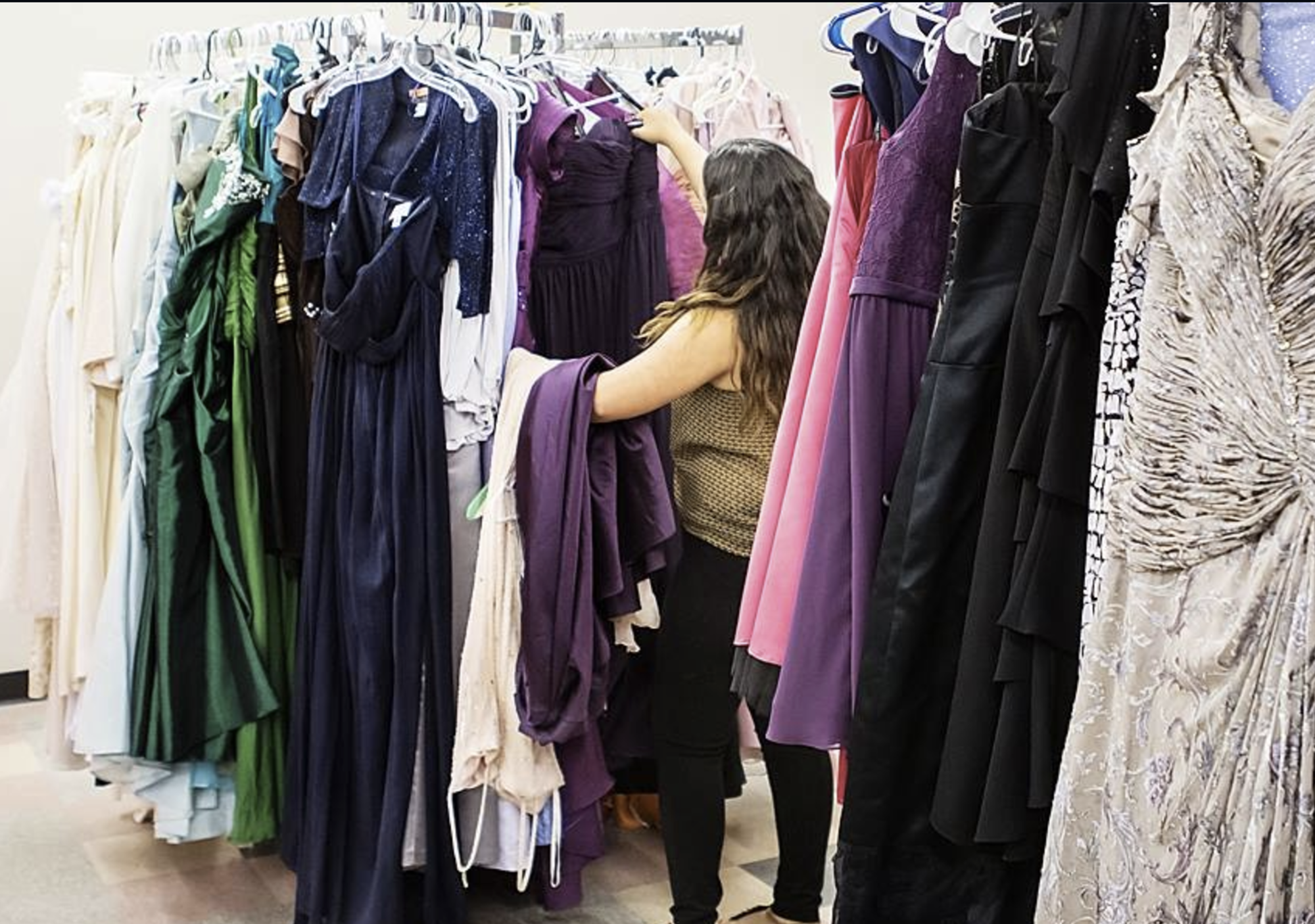 One donor wrote, “I hope these help those wonderful women who sacrifice so much enjoy a magical evening with their husbands and boyfriends in our military.”

Another woman wrote, “Thank you so much for what you are doing for our service men and women and their families. Also, I am so grateful if I can do a small part to make a special night for these very special people.”

“This has been like a huge hug from all over the country,” said Liz, senior mentor for ODYD. “These donations represent the American public’s support for our military.”

Having been a military spouse for over thirty years, Liz added that the establishment and growth of ODYD is bigger and broader than anything she’s ever seen.

Furthermore, it’s “concrete evidence of what military spouses can accomplish,” she said. “ODYD shows a demonstrable outcome of skills, which can easily translate to jobs.”

The founders and volunteers of ODYD are always heartened to receive donations, as they recognize how much many of these dresses were loved by their owners. Knowing what a generous gift of the heart each dress is, ODYD volunteers take great pride in caring for each dress and finding it a new place to make treasured memories.

And, donations continue a beautiful circle of selflessness and thanksgiving, which was not lost on Karley Deck. Searching for an accessory to pair with the gown she ultimately chose, she said, “I’m so grateful to be part of a community of women helping women.”

If you are interested in learning more about ODYD or finding out how to bring it to your installation, contact the founders via ODYD’s Facebook page. 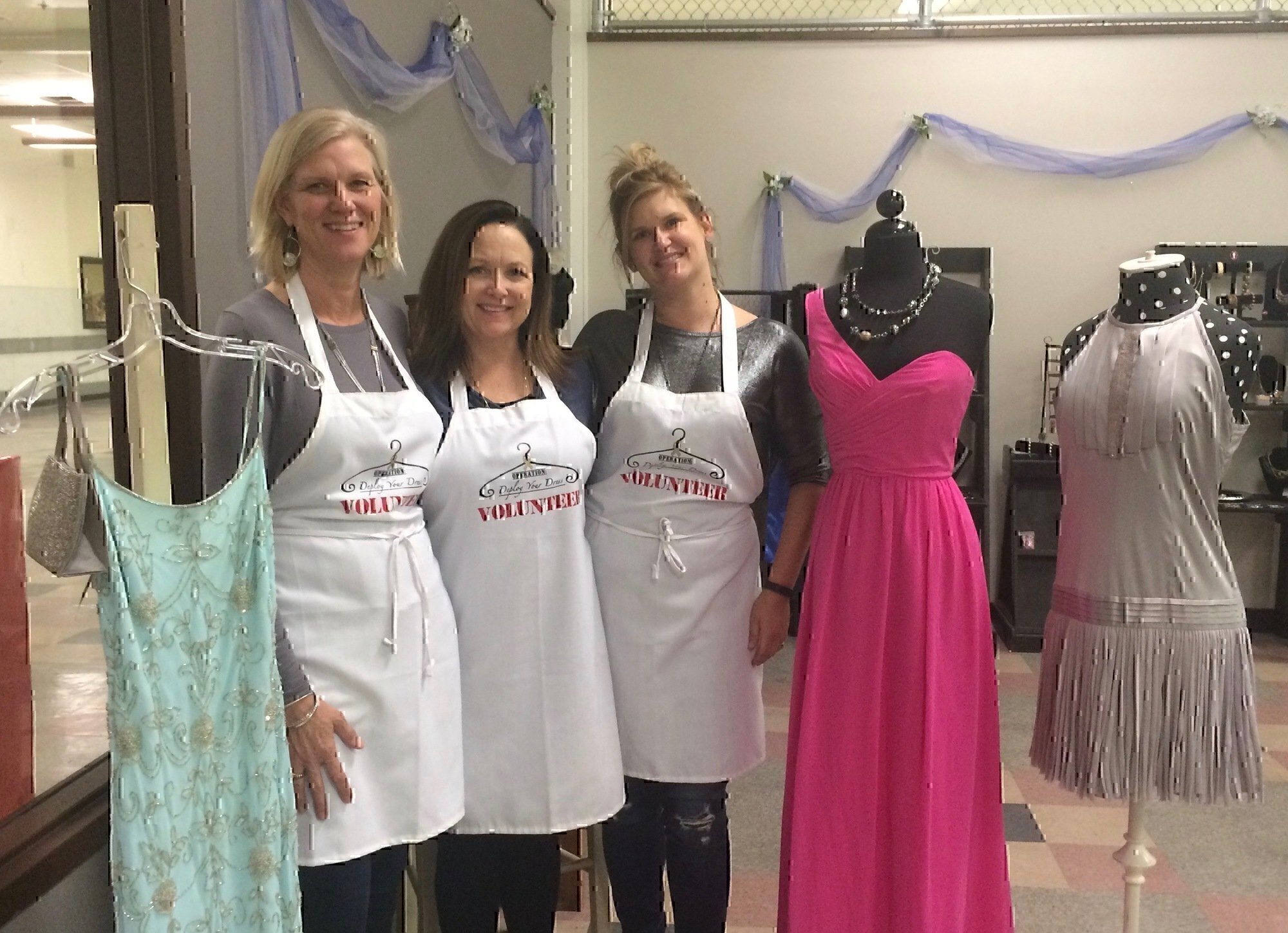 Dear Military Spouse, Now You Will Always Be Home for the Holidays

35 Reasons We’re Glad The Holidays Are Over

35 Reasons We're Glad The Holidays Are Over