by Laura Russoniello
in Parenting
0

The term Military Brat is attributed to a child of a parent who serves in the United States Armed Forces.

Despite that fact, the term brat denotes a negative connotation in the civilian sector. It is a traditional term of endearment, a rite of passage, a badge and label, a representation of a class of elite kiddos who are an amazing bunch!

So where did this term come from? It’s hard to say with complete certainty, but DODlive.mil says, “It could stand for British Regiment Attached Traveler. It explained “BRAT” as a status assigned to families who were able to travel abroad with a soldier. Eventually, it just referred to military children. But the term stuck and was adopted in many places around the world, including in the U.S.”

Wherever the term came from it is clear that earning the title “Military Brat” comes with a bunch of expectations. 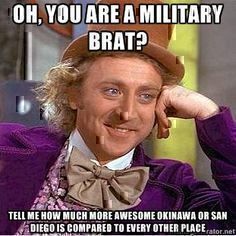 You are part of a lifestyle that is unique and comes with it’s own set of rules. You will PCS when your mom or dad say so, you will change schools frequently, and you will go through deployments. You will attend promotions ceremonies, family fun days, and military balls. When the National Anthem plays, you will stop, face the nearest flag and stand with your hand over your heart; sounds almost like a pint size version of a military contract!

A “Military Brat” also gets to experience things that are remarkable, such as living in a foreign country, knowing the difference between a UH-60, AH-64, and a Ch-47, learning to speak in acronym code, and learning to accept the surprise of not know what comes next. “Military Brats” are resilient, in a league of their own. They understand that the military life is special.

Military Brats love meeting other brats! It’s a group they can all relate to. No one quite understands the military life like another brat. Brats don’t ask the question,“Where are you from?” or “What school do you go to?” They know this will lead to an answer with at least five different responses and an end result of, “a lot of places and a lot of schools.” More often then not they are instead discussing where they will go next, what awesome experience they are looking forward to, how they just got their own ID card, and how cool it is to be able to know about all things military.

Military Brats bond in a way no one can imagine, even as adults. Adult brats can bond with others regarding where they were stationed, if they were in the same place at the same time, if they knew someone in the same branch, and the jargon that is never quite lost. There is also a long standing bond between those who were once military brats and are now spouses with brats. Knowing the lifestyle helps us adjust quicker and makes us more relatable to our kiddos. For we were once brats ourselves.

Military brats will also don themselves in military apparel upholding their loyalty to said branch. With things like t-shirts, teddy bears, blankets, dog tags, key chains and water bottles. Each adorned with logos and emblems of their branches with the term Marine Brat, Navy Brat, Army Brat, Air Force Brat! They will wear them proudly, displaying to the rest of the community that they are superior, unwavering, strong, tough, and dedicated bunch who earned the badge of a “Military Brat.”

4 Ways to Strengthen Your Relationship with Your Military Kid

4 Ways to Strengthen Your Relationship with Your Military Kid

When a Deer Teaches You a Lesson

Treasures Too Precious for TMO

Rooted and Resilient Through the Storms