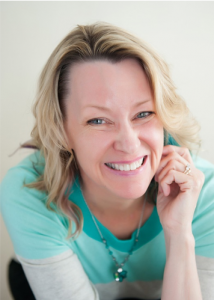 It’s the military’s fault that my characters in each romance series I write have one thing in common: a tightknit, supportive family. Yep, I’m laying part of the blame on the Navy and the Air Force. You see, this author grew up a Navy brat. My family moved every four years and as all of you spouses know, making friends at each new assignment isn’t always easy. Moving into towns where kids in the neighborhoods off base had known each other since kindergarten made being the new kid a challenge. Too often those friendship circles stayed closed. But that was okay because with seven brothers and sisters we always had each other.

Thanks to my husband’s Air Force career, our four children grew closer with every move too. There is a strength and built-in safety net knowing your siblings—your best friends—will always be there for you.

So it’s no surprise that the heroes in my new Thorne Brothers Series are a bunch of close-knit, have-your-back brothers. They’re also darn sexy, so there’s that. At the root of each book in this series is the importance of family. Like my military family, a family that sticks together and faces life as a team. The brothers, Beckett, Asher, Gray, Ryker, Eli, and Wyatt, forged their unbreakable bond early to survive a rough childhood. In fact, their business, Six Brothers Construction, was built to reunite the brothers after too many years split apart in the foster system. Together these brothers are a family with all its fierce loving loyalty and all its imperfections.

Imperfections? Yeah, they have a few. Their dysfunctional childhood manifested itself in a few not so great neuroses and hang-ups. So yes, one could say each Thorne brother is a tangled up, emotionally closed off, hot mess of a human being thanks to their parents. But they push each other out of the safe, isolated, barbed wire spaces they’d each escaped to. And if they sometimes have too much fun while doing it, well, what are brothers for, right? 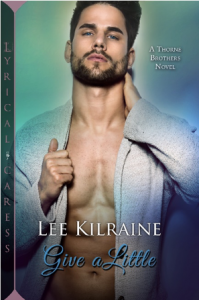 In the third book, GIVE A LITTLE, when Gray Thorne thinks he has the man flu, his brother Eli is sure a sex fast will cure him and bets him he can’t go without. That’s where the fun begins…

“You two need to go on a sex fast. It has both healing and cleansing properties.”

“Eli, where do you come up with this weird stuff?” I asked.

“Probably the same place that told you the man flu was real.”

Ash snorted. “You’re just saying that because you don’t have it. If you’d ever had man flu, you wouldn’t be so flippant.”

I looked at Ash and nodded. Sounded like we were in the same place, wherever the heck that was.

“Fine. I don’t want to do it, but you’re forcing my hand,” Eli said, grabbing out his wallet. “It’s for your own good.”

“Don’t you dare do it, Eli.” I gave him my toughest look, hoping to intimidate him enough to stop him in his tracks. I knew where this was heading.

“I have to. When a Thorne brother is suffering, we step up and help.” He pulled money from his wallet and tossed in into the middle of the table between the three of us. “I bet you both one thousand dollars you can’t abstain from sex.”

“That’s bull.” Ash rolled his eyes. “First, I absolutely can abstain. Second, you didn’t say for how long, so it’s a bulls*#! bet. Third, why the heck are you walking around with a thousand dollars in your wallet?”

All excellent points to my mind.

“For this exact moment,” Eli said. “Now, are you two in or out? Are you taking the bet or not?”

Well, heck. Here was the thing… We couldn’t turn down a bet. It started back when we were kids. Small bets—I’m talking bets where you won polished rocks or a pet frog—kept us going on the extra crappy days growing up in our dysfunctional, abusive family.

“How long?” I mean, one week, one month, or one year were very different beasts.

“Time is a constraint of a frail mind.”

“Been hitting up those hot yoga classes again?” Ash asked.

“Maybe. We don’t need a time limit. Let’s say, last man standing wins.” He looked at us both, his arms crossed over his chest in challenge.

“Oh, I’m in.” He smiled and wiggled his eyebrows up and down.

Helpful like the way they rearrange their youngest brother’s stuff all the time hoping to get a rise out of him. Wyatt is a bit OCD. Everything in Wyatt’s world has a place and a purpose. They aren’t being jerks just having fun by annoying Wyatt. I mean, not much. But they really believe his too-ordered life is holding him back. So GIVE AND TAKE, the second book in the Thorne Brother Series, is a fun ride as Wyatt’s brothers “help” him let go a little.

Another thing the brothers do to keep their family bond strong is wrap up each weekly meeting with an airing of grievances. Listening to each other is a way to remind themselves that no matter how messed up their parents were—they can choose to be different. A way to nip little annoyances in the bud…

“If that’s it, we’re down to grievances. Anyone have any grievances this week?”

“I do,” Eli said. “Gray, you’ve been a pain in the ass around here. You got very pissy with me two days ago in the break room.”

“I don’t do pissy.” I crossed my arms and frowned. “I do remember getting grouchy with you, and have a slight memory of being a bit of an ass#*!^, but not pissy.”

“You’re being kind of pissy right now about the word ‘pissy,’” Ash said.

The thing about close-knit siblings is they don’t let you get away with much. Like my military family in real life, the Thorne brothers are fiercely loyal and supportive but also the first ones to call you out on your shenanigans. And for the Thorne brothers those shenanigans involve fun banter, crazy bets, de-stressing in the batting cage, lost and found siblings, excavating emotions buried deep, trust issues, and love. Yes, at the core, always love.

Want to get your hands on Lee Kilraine’s latest romance, Give A Little?

Lee Kilraine is a former Navy brat, Air Force spouse, and a proud Air Force mom with two of her children stationed around the world. Lee mostly hangs out in yoga pants writing away at her computer with her Golden Retriever, Harley, destroying something at her feet. When she’s not writing you might find her *thinking* about working out, mixing her metaphors with wild rebellion, or sending Bitmojis or GIFs to one of her four young adult children. You can find her online at leekilraine.com or on Facebook at LeeKilraineAuthor.

Work From Home Jobs for Military Spouses are Booming (Like These!)

The Perks of Living On-Post