Military Spouse Unplugged: Why You HAVE to Get Off the Grid Sometimes

by MJ Boice
in Health
0

Going unplugged is more than just a trendy buzz-phrase…it’s NECESSARY, and we ALL need to do it.

That’s not to say that technology rules me, but it does play an integral part in my life…in ALL our lives, really. Social media alone has allowed us to keep in touch with almost every military family we meet and has become a tool to solidify and maintain friendships across those imaginary lines that separate us, among other things.

But having the world at our finger tips comes at a price. Everything from text messages, phone calls, emails, social media outbursts and the never-ending notification “dings” perpetually draws us deep into the 24/7 cycle leaving us exhausted and overstimulated all at once. I don’t care who you are; it’s affected all of us one way or another.

I didn’t exactly ‘decide’ to go off the grid on purpose. A fellow mil-peep invited my family to join hers at their cabin in the mountains. There were plenty of beds (i.e. cots), running water (minus the toilet which was replaced with an outhouse…yuck), and electricity (thank GOD). She’s told me stories before of all the great times her family has had there sitting by the fire, going on hikes and finding waterfalls. It all sounded amazing, but there was one catch: No WiFi, no cell service, no TV and NO communication with the outside world for the whole weekend.

I wasn’t so much worried about myself as much as I was my teenagers. I mean, they were born into the internet era…I’d never stopped to think about how that would impact them. Would it be like detox for them? Would they tweak if we took away that integral part of their lives? They were used to the “no phones at the dinner table” rule, but four whole DAYS? Isn’t that their equivalent of losing a limb? If not, then taking away their phones wouldn’t be an effective punishment when they screw up…but it works every time.

That’s when I knew we had to do it. That’s actually when I knew I had to do it. Not only to shut my own brain off for a while and decompress, but to show my kids what it’s like to have face-to-face conversations…that ‘maintaining eye contact’ is more than a sideways glance…that it’s totally possible to have fun without having the world on speed-dial. Shoot, at that point, I needed to be shown what that was like again. I’m thinking you might need that too.

Here’s what my family learned (and re-learned) when we “raged against the machines” over Labor Day weekend: 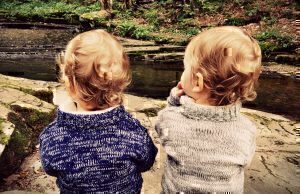 These two cuties got it right. Surrounded by beauty and nature, our friend’s twin boys popped a squat and just sat for a moment. They’re too young for the bells and whistles of technology, so it was no issue for them to just STOP and BE. We should all take a page from their book. Forget about yesterday’s crap for a second, put tomorrow on hold and just press the damn pause button for a second! 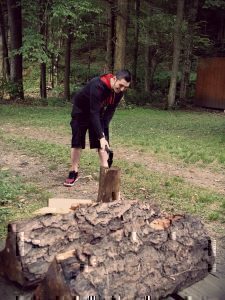 My son is no different than any other teen on the planet: he HATES hard labor (i.e. chores). I count myself lucky that he does what he’s asked at home with little more than a groan, but he’s never had the chance to do any ‘real’ hard labor. When our friend asked him to help chop wood for the fire, he was more than happy to be an ax-toting BA! So put down the phone, roll up your sleeves and get to work! 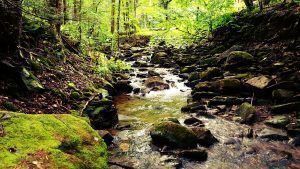 Dude, stop…just STOP. If we all just stopped and looked up from our digital ball and chain every once and a while, we’d see something beautiful. OK, sure, maybe not something as exquisite as this waterfall I snapped a photo of, but beauty comes in many forms. Like when someone gives up their seat on the bus for someone who needs it, or when someone smiles at you on the street. Beauty can be found around every corner if we just make the decision to LOOK. So LOOK dammit!

When our friends invited us to join their family, I initially just thought it would be a fun time away. But in reality, sitting around a big table for each meal or making s’mores around the fire or going on hikes was more than just fun. Our mil-friends let us into their world to view the inner-workings of their family, and we did the same — both without judgement. Merging families for four days actually solidified our placement in one another’s lives. Military life already does that for the most part, but living together puts that relationship on a whole ‘nother level. #FRAMILY

Going unplugged is more than a trendy buzz-phrase…it’s a necessary staple we should ALL do once in a while. Our world didn’t end when our phones went silent, and it was still standing when we made it back to civilization.

Going off the grid forced us all to reflect, explore, create memories and have conversations we will all cherish for the rest of our lives. I don’t think we would have been able to do that with the distraction that IS technology.

So go ahead…Unplug and go off the grid. Press the damn pause button and start seeing the world through a new lens: YOUR OWN.

Is It Ever Ok Not To Stand for the Flag and National Anthem?

Is It Ever Ok Not To Stand for the Flag and National Anthem?

How to Avoid Being Invisible Even While Working From Home