Spouse Confessions: I Can’t Have a Baby 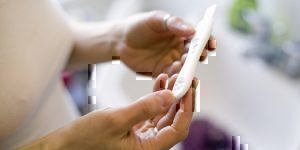 Editor’s Note: All authors in our Spouse Confessions Series are anonymous – they’ve shared part of their hearts with you and some pieces are incredibly difficult for them to write down. Please keep this in mind as you read and comment.

The very first thing I learned as a military spouse was to let go of the ability to plan and accept the fact that you don’t have any control.

This key piece of knowledge has been the single most important factor to happiness for me as a military spouse. When I decided to accept the fact that neither my husband, nor myself can control his schedule, where we’re going to live or even our lives in general while he is in the military, I became a happier person.

So it came as a surprise that despite all the work I’ve done to accept my inability to control anything, I got knocked off my feet again by the surprise –  yet another thing I can’t control. Except this time it’s not just where we live or when we’re going I can’t control.

It’s my ability to conceive children.

When we transferred away from family and friends this last PCS, (to a duty station that we weren’t super excited about anyway), and my husband transferred to a shore duty job that left him frustrated and bored daily, we figured at least there was one silver lining. Or more accurately one pink or blue line as we pictured it, that would make the next few years at this station worth it.

Four weeks before we were set to transfer I looked at my pack of birth control pills, and felt tremors of excitement, nervousness and to be honest, a little fear as I threw both caution and those pills in the trash.

I figured from that moment on it would only be a matter of time before our family of two became a family of three.

Four weeks went by and I nervously ordered a pregnancy test off of Amazon, convinced that Aunt Flo’s absence  must have meant that this.was.it. This was the moment our life was going to change.

I took out a stick, followed the instructions, waited, waited, and almost a year later I’m still waiting.

This last year has been nothing but a blur of expensive pregnancy tests, late nights spent looking for solidarity on pregnancy forums and more recently, doctor appointments where scary words like “infertility” were thrown around, lingering poignantly in the foreboding air around me. I’m in my twenties, healthy and active.

I can’t help but laugh with sad eyes at how ironic it is that I’ve found yet another thing in my life that I can’t plan or have control over.

It doesn’t help that every group get together or party we go to, someone inevitably asks the seemingly innocent question of, “When are you going to have kids?” This leaves me shrugging off the question with, “Oh I don’t know, we’re thinking about it.” The truth is, that’s all I can think about. Who knew something I spent years worrying about preventing would be so hard to stop preventing and make happen?

I know I’m not alone in being an “infertile myrtle.” In fact, 1 in 6 couples have trouble getting pregnant according to the statistics, but no one seems to talk about it. I don’t directly know anyone that has struggled to get pregnant. This has felt like another silent battle in a life that is already filled with silent battles.

My friends talk about their feelings of frustration when it took them three months to get a positive test, but they can’t understand the feelings of inadequacy and fear when month after month you get the same negative sign. It’s a sign that seems formulated to say that you’re less than a woman when you are already feeling like a failure.

I’m still in the early steps on this path, and to be honest I don’t have any advice for anyone else stumbling down the same path. If you’ve struggled with infertility, you’re all too aware that everyone’s body is different and there aren’t always answers as to why.

I hope things get easier and I hope you that are able to get the miracle you’re praying for. For those “fertile myrtles” out there as well, maybe think twice next time you ask someone when they’re going to have kids, or “Why aren’t you pregnant yet,” and remember that you never know what someone might be going through.

Read more about infertility in the military.

Is “Sacrifice” the Right Word for a Military Spouse?

Is "Sacrifice" the Right Word for a Military Spouse?