by MJ Boice
in Entertainment, News
0

“We must always honor and remember those who have given their lives for our freedom,” – Lee Greenwood, Country Music Singer/Songwriter

I met Tina Mengel-Vickery at a Washington Redskins Military Appreciation ceremony at Fedex Stadium on Sunday, Nov 15th; when the Redskins hosted the New Orleans Saints. She was going to be one of 200 surviving family members that would be taking the field to honor her fallen Marine during the pre-game performance where Lee Greenwood would sing his iconic song “God Bless the U.S.A.”.

Tina is much like any other military spouse. She has endured deployments and other separations, the unique challenges we all face as military families and the joys of being a mom to her 3 year old little girl.

But everything changed on November 9th, 2013 when her husband Cory, who served two tours in Afghanistan, took his own life as the result of depression and PTSD; conditions that many of our nations service members know all too well.

However, in true military spouse fashion, Tina has made it her goal to use her experience to help others in similar situation and do her part in the fight against PTSD and suicide. This is just one of the reasons she is part of an organization that is widely known as TAPS. 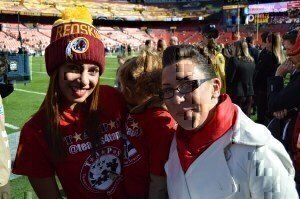 Bonnie Carroll, Founder and President of TAPS (Tragedy Assistance Program for Survivors) lost her own husband in an Army plane crash in 1992; and from the ashes of that heartbreaking experience is where TAPS was born.

Since its inception in 1994, TAPS has helped over 50,000 surviving family members through the various services they offer. Navigating through the maze of resources and benefits available to them can be a daunting task, especially during such an emotional and sensitive time. This is why TAPS offers compassionate care through a 24/7 helpline, casework assistance and peer-based emotional support; among other services as well. 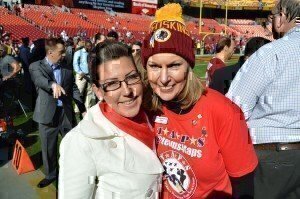 (Bonnie Carroll is set to receive the Presidential Medal of Freedom; the highest civilian honor, on Nov 24th. )

As part of Salute to Service Month, the NFL’s league-wide military appreciation initiative, the Washington Redskins will be hosting the Dallas Cowboys on December 7th at their own annual Salute to Service game presented by USAA, the Official Military Appreciation Sponsor of the Redskins.

For more information about the Redskin’s Salute to Service, visit: https://www.redskinssalute.com/ 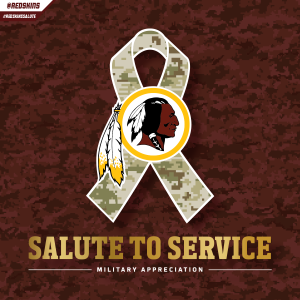