Crossing Oceans To Honor The Fallen

When she began her project in 2012, the last thing she would have ever dreamed would be a journey across the Pacific Ocean to bring home the saber of a fallen soldier. But, her heart’s passion brought the opportunity, her heart told her she needed to go–and when her heart calls, she answers.

Her name is Theresa Johnson, and she is our 2015 Fort Hood Military Spouse of the Year. And while she might never have imagined her upcoming journey, it is not surprising. Theresa she is the type of selfless person who gives her entirely of herself to help others. This time, her energy is leading her on a journey to meet the family of Sgt. Sapuro Nena on the small island of Kosrae, one of the four states of the Federated States of Micronesia. 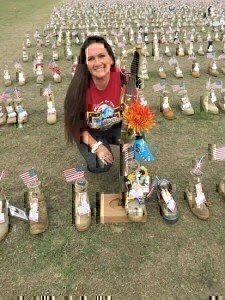 In 2012, Theresa created a display of boots to honor the soldiers who have been killed in action since 9/11. We profiled Theresa’s inspirational event and story in our November issue of Military Spouse. The display has since reached over 7,100 boots, each one with special items left behind from those who have visited.

In 2013, because of her work to put together the display, a gentleman from the 14th Calvary Association approached Theresa with a special gift. She was then presented with a Saber and was told it was made for the family of Sgt. Sapuro “Sapp” Nena. The gentleman went on to tell her how he did not have proper addresses for the family and would like to have it displayed with Sgt. Sapp’s boot at the display with the promise to return it to the family as soon as possible.

For the past two years, Theresa has worked tirelessly to find the family of this fallen soldier, reaching out to the 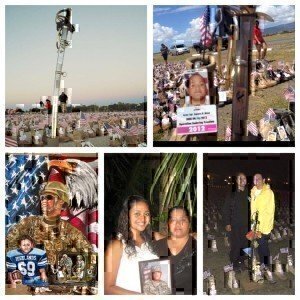 community and posting images on social media sites. In 2014, she relocated to Fort Hood and again set up the display and again asked for information for Sgt. Nena. Immediately she received messages from those who knew him and that his family was in Kosrae. As soon as the display went back up in 2015, the events started to unfold.

Theresa soon began to interact with the mother of Sgt. Nena and decided that a gift such as this could never be shipped in the mail. This was something personal that needed to be hand delivered with the love and care of a fellow military family. She has since set up fundraising to be able to get the saber home to the gold star family. Theresa will soon embark on this journey before Christmas. For more information, please take a moment to look into the GoFundMe account set up for this trip. Taking Sgt. Nena’s Saber Home.

We are excited to follow along with Theresa in this journey, from Fort Hood, Texas to Kosrae, Micronesia.

5 Gifts That Give Back

5 Gifts That Give Back