A Veterans Day Tribute to Those Who Came Before Us

by Natalie Hayek
in Life
0

On a recent visit to the World War II Memorial, my thoughts went quickly to a woman who, though curiously quiet, measured, and reserved, is among the many profoundly brave and courageous WWII veterans: my grandma. As I wandered through the memorial’s great stone structures, emblazoned with thousands of stars and immortalized proclamations, I recalled the day that a tightly knit group of women characterized her as not only an extraordinary veteran, but also as an exemplary military spouse.

I was sitting at my aunt’s dining room table with my sister and sister in law, my mom and her four sisters, and my ninety year old grandma and her own sister. We were gathered for my grandma’s birthday, but my aunts also threw a wedding shower for me; I was going to marry an airman in five weeks and join a life they knew all too well.

My grandparents met in World War II.  My grandma, Rose, was an Army nurse and my grandpa, Jim, was a bombardier with the Army Air Corps. They met in 1943 in England, where Grandma was with the 44th Evacuation Unit and Grandpa was with the 9th Air Force. In his journal, Grandpa wrote extensively about his experiences, his colleagues, and the love of his life, whom he affectionately called “Rusty” after Grandma’s bright red hair. 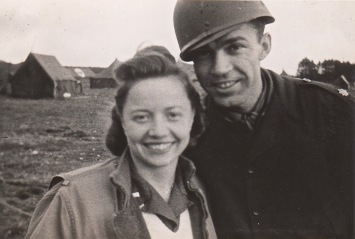 Grandma and Grandpa, in Belgium, 1944.  In the background sits the field hospital where Grandma worked as an Army nurse. 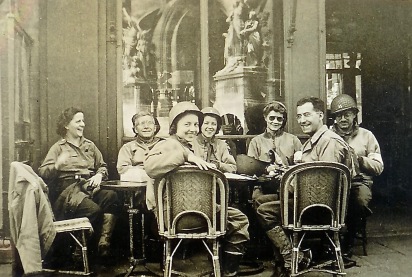 Grandma (center foreground) and friends at a cafe in Paris, 1944. 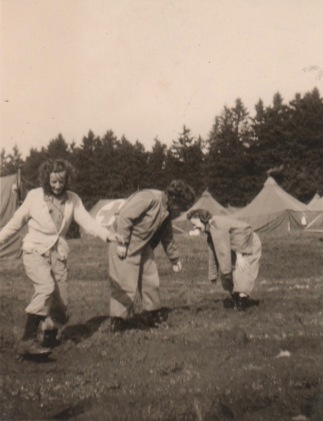 Grandma, right, with two nurse friends at their Belgium field hospital, 1944. They are doubled over laughing because the ground was so muddy that they were having trouble walking.

My grandparents’ units weren’t always near each other, and in fact, sometimes they were in separate countries. But Grandpa went to great lengths to arrange visits. When Grandma learned that her unit would go to France after D-Day, she called Grandpa and indicated in vague terms that her unit was leaving. Understanding what she couldn’t directly tell him, he and a friend took a jeep to where he knew her unit was preparing to leave.

Knowing he had to make it through several checkpoints, Grandpa confidently and urgently threw out official-sounding words and phrases to the MPs: “We’re the Advanced Element of the Forward Operating Group!” They were speedily allowed through.

My grandma was surprised and happy to see him, and they made plans to meet after the war.

After returning to his own unit, Grandpa wasn’t satisfied.  Days passed, and he didn’t know where Grandma was. He resolved to make a “wild trip alone” to find her. As it turns out, Grandma’s unit had been delayed, and he located her in a tent where she and many others were watching a movie. A loud whisper shot through the crowd: “Jim’s here!” And this was followed by Grandma: “Oh boy!”

I like to imagine that she stood, walked quickly, bent over in front of the screen, her shadow projected onto Veronica Lake.

Outside the tent, they said one last goodbye.  Maybe they shared a romantic embrace and a long conversation where Grandpa made Grandma laugh the way he was known to do. Maybe he bent down to her five-foot-nothing frame from his six-foot-one tower and kissed the top of her fiery hair.

What I know for sure is that Grandpa was determined to see her again as soon as possible, and a month and a half later he got approval to personally inspect rockets and gyro gunsights in France. He was able to see Grandma, and they discussed getting married.  Within another couple of months, they were engaged and later married in the Chapel of the Seven Sorrows in Notre Dame Cathedral. 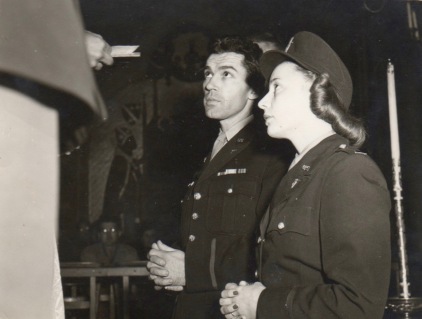 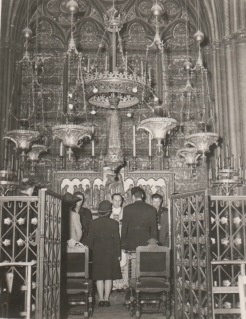 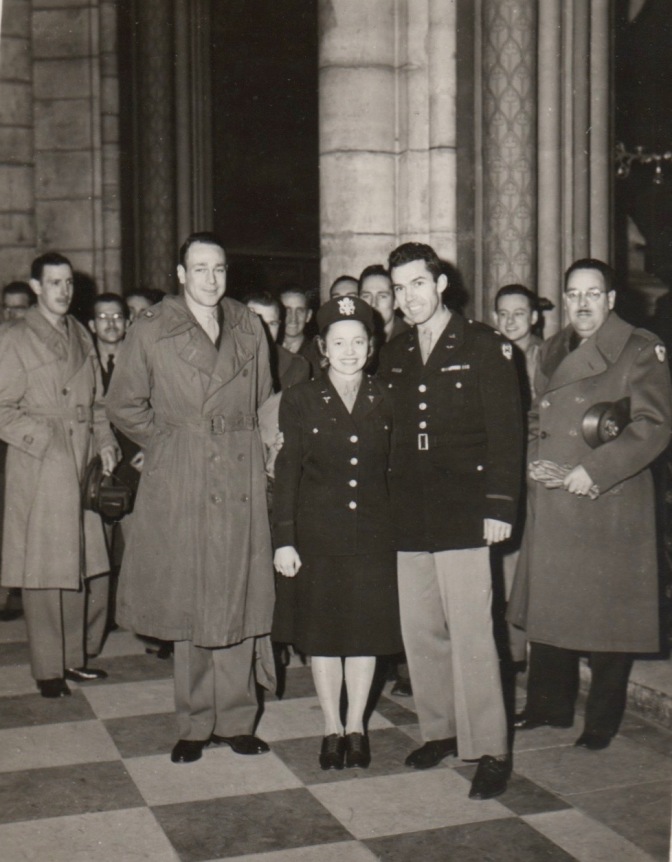 Before I got engaged to my husband, I visited Grandma for an afternoon to ask her one important question: “How did you do it?” After all, she’d experienced twenty years of moves, deployments, anxiety, danger, and uncertainty.

And Grandma being Grandma, an uncomplicated, realistic, calm woman, told me simply, “Well, I was busy with the kids. And, Grandpa was always just so funny – when he was home, it was such a relief.”

That was it. I focused on my responsibility and I enjoyed every moment my husband was home. Plain and simple.

Back at my aunt’s house, after I’d finished opening presents, eating cake, and sharing wedding stories, I asked my aunts: “So, as kids growing up in the military, how did you keep it together?”

In an instant, and without a word, all five fingers pointed to their mom.

And, characteristically, Grandma dismissed that she did anything remarkable. But her daughters insisted, “She was our rock. She kept it together.”

Reflecting on her life, it’s easy to see how Grandma developed the resilience and fortitude that gave her children necessary strength and security. Grandma grew up on a farm in central Iowa and was the only one who left. It was, perhaps, her first uncommon choice, but it was certainly followed by many others along with immense challenges. 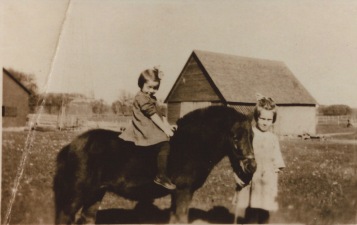 In 1934, she moved to Ottowa, IL, to become a nurse, and she trained with a group of friends in Chicago. When the war broke out, she and a friend bravely decided to join the Army. She went to war. She was behind enemy lines in the Battle of the Bulge. She escaped the Germans in the still of the night, in a truck that went 5 mph to avoid making noise by shifting gears.

The quiet, patience, and focused determination that must have been required that night are overwhelming to imagine. She witnessed gruesome events and the grisly aftermath of concentration camps. And in the decades that followed, she kept the minds of seven babes at ease, comfortable, safe, trusting, and assured. She was married happily to my grandpa for 55 years before he died.

Grandma passed away at ninety years old, just ten days before I got married. She was laid to rest next to Grandpa, who had passed away seven years earlier. At her burial, my aunts, my mom, my cousins, and my sister and I sang “Dona Nobis Pacem,” Latin for “grant us peace.” My mom and her sisters sang it frequently growing up, a tradition they imparted to their own daughters.

When I stop and think about it, I conclude that there couldn’t be a better hymn for my own life, and really it’s a hymn for all military spouses. Live peacefully. Do not complicate or overanalyze.  We military spouses make uncommon choices and face unique challenges in our unpredictable lives, but like Grandma, we have the capability to weather this life with resolve and steady measure. When we do, we make a difference to others.  Grandma sure did.  We can, too.

Happy Veterans’ Day to my Grandma, my Grandpa, those who have served and those who continue to serve. Thank you for being brave enough to do what most are not. 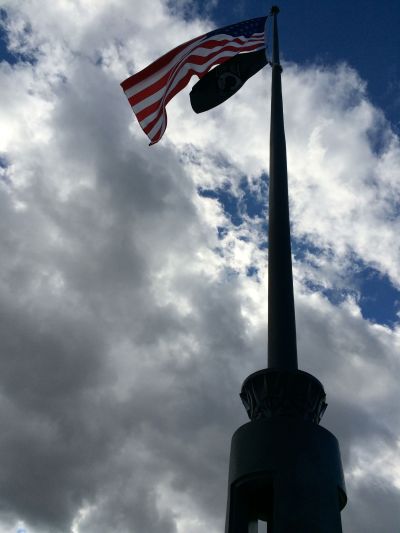 Veterans Day Reflections: To My Dad, My Hero