I Met the Talent Behind 12 Strong! Here’s what they had to say about us…

by Jen McDonald
in Entertainment
0

Note: the movie 12 Strong releases on January 19. Travel and accommodations were provided by Warner Bros. Pictures.

Many military spouses, like me, have been around long enough to remember the differences between the pre 9/11 and post 9/11 military. Not only did 9/11 change our country, but it altered the way we live as military families. It changed our bases, it changed security at the gates, it changed the way our military deployed, and it changed us.

September 11, 2001 was the clear line in the sand, delineating our lives leading up to that moment from everything that would follow. We went from open bases to the presence of snipers on the commissary rooftops in the matter of a few hours–a sight I’ll never forget. We found ourselves explaining to our children, as we drove home from soccer practice to our on-base housing, the presence of angry protesters lined up outside the base gates and how their daddy wasn’t a killer the way the signs accused.

We can never forget, not only because of the great loss of life of our fellow Americans, but because we’ve lived the fallout.

I was honored to attend the 12 Strong movie screening and press junket with other military spouse bloggers last week in Los Angeles. Based on the novel Horse Soldiers by Doug Stanton, the recently declassified story recounts the mission of the Special Forces unit who were the first U.S. troops on the ground in Afghanistan after 9/11, joining forces against Al Qaeda and the Taliban in cooperation with the Northern Alliance. While overcoming a cultural divide and suspicion on both sides, the mission meant also adopting the locals’ tactics: traversing the rugged terrain and mountains on horseback.

After the movie screening (review to be posted soon!), I was able to talk with the filmmakers and some of the cast members about their motivation behind involvement with the film, including a round table discussion with star Chris Hemsworth.

The atmosphere of respect and honor the filmmakers and cast give to the real people behind the movie and to present day military and families was palpable. When one press member commented that war movies haven’t always shone a positive light on military, Chris Hemsworth, who portrays Captain Mitch Nelson, shared his initial response to the story:

“My first instinct was I just– couldn’t believe it was a true story. I knew about this conflict and this war, like a lot of people, but not about this mission. And I was sort of engrossed and shocked and fascinated by the details. Then, speaking with the real guys through the process…there’s such an honesty and openness and a lack of sort of dramatization or ego or so on as they retell or recount these events. And such a humility, you know? They’re the real heroes, and to put themselves in these positions and in harm’s way, with their safety in jeopardy, but for the rest of our safety, is something beyond admirable….But I definitely felt the weight, that responsibility. I think we all did.”

The Story Behind the Story

The movie doesn’t shy away from the toll of war on military families. Producer Molly Smith, on the family scenes: “There’s a line in the movie I love so much where Michael Shannon says, ‘How do you love your family and leave them to go to war?’ And I think that’s such a poetic, beautiful line, because people do this every day.”

Author Doug Stanton, who spent time with the real-life Green Berets and their families while researching the story, agreed. “It’s funny, you brought up that scene, ‘How do you go to war and still love your family?’ I remember sitting in Bob Pennington’s kitchen, and he gave me that line as I was interviewing him, and then I heard it in the movie. It just–I got choked up because really in essence, this is a secret story that we’re now telling about a part of our society that’s been fighting now for 17 years.”

On Working with the Afghans and Authenticity

Jerry Bruckheimer noted the tension of U.S. soldiers having to act as “diplomats on the ground” and their relationship with local Afghan people and Northern Alliance soldiers.

When you see the movie, you may be surprised how real the locals and Northern Alliance fighters seem. Well, that’s because they are. Northern Alliance fighters who were part of the original battles, along with their family members, filled many of the extra roles, giving the movie an unmatched sense of authenticity. They also contributed to movie details and gave input to the overall feel of what was portrayed.

Director Nicolai: “There were soldiers who are right now refugees [living in] Albuquerque, and I think they really helped us by telling us exactly how they were feeling. And for me, it was crucial just to sit there and listen to them.”

Navid Negahban added that persuading Afghans to cooperate in helping with the movie wasn’t easy, but he understood the importance of it, as it would be the first film to depict what Afghans went through during the era.

“The families that I talked to…didn’t want to be involved in the film, but when I told them what we are doing and what is this film about, the head of the families, they got together…Then, all of a sudden, we had about 700 people lined up. Everybody from Uzbek families, Tajik families, Hazara families, all of them…”

Producer Jerry Bruckheimer expressed his admiration for the men of 12 Strong, adding that the effort to bond with the Afghan people and find a way to work together against a common foe was unique. And he made sure to get the story right–several members of the group were present during the film’s shooting for fact checking and military advising. 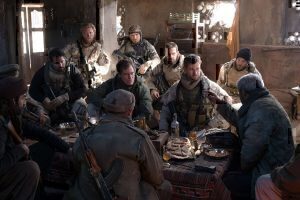 On the Aftermath of 9/11 and the American Ideal

While it seems that many current military themed movies tend to have political leanings one way or the other, 12 Strong tells the story of an, until now, unknown mission. It reminds us of the wave of patriotism and common feelings of Never Again! we collectively experienced after Sept. 11.

Actor Geoff Stults: “I think everybody that was old enough obviously remembers where they were at and the way they felt on 9/11…they [the soldiers] chose to make what could have been the ultimate sacrifice because of what they believed in, what they believed America stood for. This is about a love for one another and a love for the ideal of what America is, and they believed that they were making a difference so that nothing like 9/11 would happen again.”

Jerry and Nicolai summed up their feelings about the movie as a whole and these military men in particular.

“Something Real”: Sitting Down with Chris Hemsworth

Popular actor Chris Hemsworth is known around the world for his well loved portrayal of Marvel’s “Thor” and other roles. While in Hollywood, he sat down with a group of bloggers to field questions and discuss his motivation behind tackling a completely different role than what he’s played before in 12 Strong: “I wanted to do something real and something grounded.”

Having the Special Forces men who were highlighted in the movie actually with them on set brought a different level of nervousness to the actors.

“I just wanted to embody the sort of heart and soul and the integrity and the aspects of his personality. But I remembered him being on set a couple of times, and just being really nervous, especially the first time, because thinking he was going to step in and say, ‘This is not how we said it’.”

Hemsworth also expressed a new understanding of what military families go through regularly with deployments, separations, and the the unknowns faced when the military member walks out the door. He spoke to the strength of military spouses.

“You know, I live in Australia and I left four days ago. And my daughter said, ‘But you just got back from work. Why are you going again?’ And I was thinking about it, and it brings me to tears doing that, right? To be walking out the door going to war, what you guys deal with, I mean I cannot imagine. And again, it takes a certain person to be able to do that. And I don’t think I have that strength. So yes, it’s incredible.”

And his message to military families? 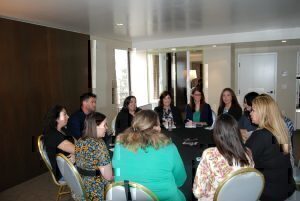 “I think the same as just about everyone, which is thank you. Thank you, thank you for what you guys do and the commitment and, you know, so that we can live our life in peace and enjoy the freedom that many people don’t get… that we are fortunate enough to receive due to all of you guys and all the military. So yes. Thank you.”

Life at 40 With a Baby, and Another on the Way