Lost in PCS: What’s the Real Deal with Military Crates Being Auctioned?

by Lauren Lomsdale
in News
0

At the time of publication, Gene Daniels Auctions cancelled the auction that was scheduled to be held on May 6th.

On May 3rd, military Facebook groups began to blow up with the news that a company in Portsmouth, Virginia was auctioning off crates of military families’ possessions that had been seemingly unclaimed. The backlash happened immediately with service members, spouses, veterans, and civilians commenting on both Gene Daniels Auctions, the agent selling the crates, and Bay Area Movers, the moving company in possession of the crates Facebook pages. People are enraged that these companies would sell off the belongings of military families without doing their due diligence with trying to locate the people to whom the crates belong.

But is that really the case?

The Facebook post that went viral came from Gene Daniels Auctions, stating that auction which is to be held May 6th contains items from military families who have lived overseas. The description states that the items are rare “hidden treasures” and that people can find items such as televisions, artwork, and handcrafted pieces in these unopened and sealed crates. You can read the whole statement posted on the Gene Daniels Auction website below:

“Unclaimed Shipments from Overseas…These Shipments are unclaimed household goods / personal property of military members who were stationed in locations such as Italy, Germany, Spain and Bahrain. Many Military members take advantage of their time stationed in these faraway places and purchase unique furniture pieces and decorative items handcrafted in these countries. HIDDEN TREASURES…The contents of thee shipments have not been seen and containers have been sealed since originally packed overseas. The shipment(s) you bid on may contain such items as antique furniture, china, crystal, artwork, TV’s and other electronics or possibly collectors’ items.”

As military families learned of this upcoming auction, they immediately began to question the legitimacy of the “unclaimed” items. Names, ranks, and dates of PCS can be clearly seen on the outside of the crates giving people the impression that Bay Area Movers did not work to notify families that they had their belongings. Numerous people began to recount how they had also lost items during a PCS and how it baffled them that companies could simply auction their items off to make a quick buck.

However, in further investigation we found that the auction may not be as it seems. In an article by Amy Bushatz from SpouseBuzz, Bay Area Movers said that they have done everything that they are legally required to do to contact the owners of the crates. According to Virginia law, after the items have exceeded their storage limit time (which, by military storage policy is 90-180 days) the moving company is required to notify the families three times by certified mail. After that they are allowed to auction the crates. Their contact stated that some of the crates have been in their possession since 1992, and since they started notifying people they have had some come and claim their items. They even stated that they tried locating some of the owners via Facebook and was able to track down one man via his mother this way. But Bay Area Movers stated that since it is high season they simply need the storage space, and the auction is the best way to get rid of unclaimed items taking up space.

In terms of Gene Daniels Auction’s responsibility for the items, they maintain the position that they “only hold the microphone.” They do not know what is in the crates and they do not hold any legal responsibility. They state that they are simply the agents helping to move the items out of the Bay Area Mover’s storage facility. However, many on Facebook believe they that have a moral obligation to help find these families or, in the least, refuse the contract to sell off military families items. On the Gene Daniels Auction Facebook page, Tony Franke repeats the sentiments of many others stating, “You say it’s only you auctioning what has been provided. You can always say NO, I won’t auction THOSE items.”

However, military families still feel as though Bay Area Movers and Gene Daniels Auction are taking advantage of the difficulties that military families experience when they PCS, especially when complete OCONUS moves. A Facebook group called “Lost in PCS” is filled with stories of movers losing, breaking, or damaging items. Moving companies will claim that items are lost or they will tell families to simply claim it out because “the storage facility is too full to look for them.”

Many do not believe the statement from Bay Are Movers that these items have been in storage for extended periods of time and that the owners have been attempted to be notified is true. Especially when last night a screen shot of one of the crates presumably set to be auctioned showed a pickup date of 4/26/2017 and a delivery date of 6/20/2017. However, one commenter on the SpouseBuzz article, Chesapeake Girl states that in regards to this situation that, “…one other commenter did mention that perhaps the auction house was taking photos in the moving company’s warehouse and simply photographed a random area, not a specific crate that is part of the auction. That is a possibility.” 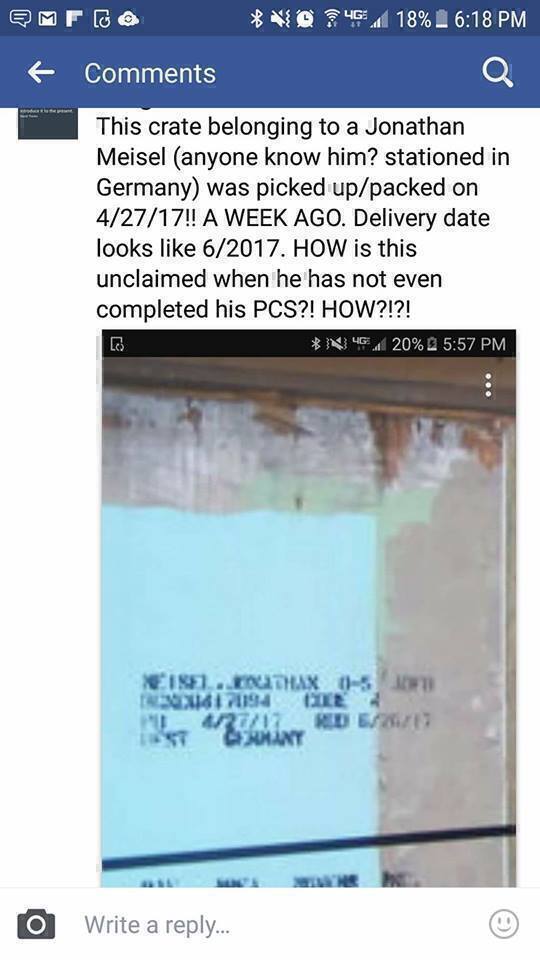 Most believe that both Bay Area Movers and Gene Daniels Auction have a moral responsibility to find the owners even if they have done all they are legally required to do. Some stated that given the nomadic lifestyle of the military that sending certified letters to the last known address, especially if the crates are from decades prior. Others mentioned using the power of social media, especially since this went viral, to post the names on the crates so that the owners could better be attempted to be found.

In the end, it seems that what both Bay Area Movers and Gene Daniels Auctions is doing is perfectly legal (even though many would argue that it is unethical). They have seemingly met all the requirements as provided by Virginia law in attempting to contact the families to whom the crates belong. But as we know, the military watch out for our own. There have been talks among families in generating names of anyone who has lost items or put in claims through Bay Area Movers and handing those over to the FBI for further investigation. Headquarters Marine Corps has been notified of the incident, and they have been in contact with the other armed forces branches to find out what is happening with these items. Some spouses have stated that they have left messages for their Congressmen and state representatives as well.

Whether or not Bay Area Movers or Gene Daniels Auctions are legally allowed to hold this auction does not seem important to most who are concerned with this issue. Each year over 700,000 service members are PCS’d, giving their personal belongings to people who are contracted to take care of our things to the best of their abilities. Of course, we all have horror stories of things going missing or breaking during transit and that can only be expected. But the heartbreak that many families experience when they have lost baby photos or sentimental items is increased tenfold when they find out that they may have simply given the highest bidder.

3 Ways to Grow Together While Separated

What NOT to Say to a Military Spouse

I Promise She Is a Gift:  A Letter to my Firstborn