by Guest Author
in News
0

Congress’ planned four-month budget extension is expected to cause a host of budget headaches for Pentagon planners, but it won’t disrupt troops’ pay raise in January.

House Appropriations officials confirmed they’re drafting the continuing resolution legislation — designed to provide a budget bridge from December to April — with a pay raise for troops in mind.

Exactly how much that will be is still undetermined. In August, President Barack Obama announced plans to set the 2017 military pay raise at 1.6 percent, 0.5 percent below the expected increase in private sector wages next year.

If it stands, the raise will be the fourth in a row where troops’ pay hikes fail to keep pace with those of civilian peers. House lawmakers have proposed a 2.1 percent “full” pay raise, but need to carve out more than $300 million in new funding to pay for the extra increase. 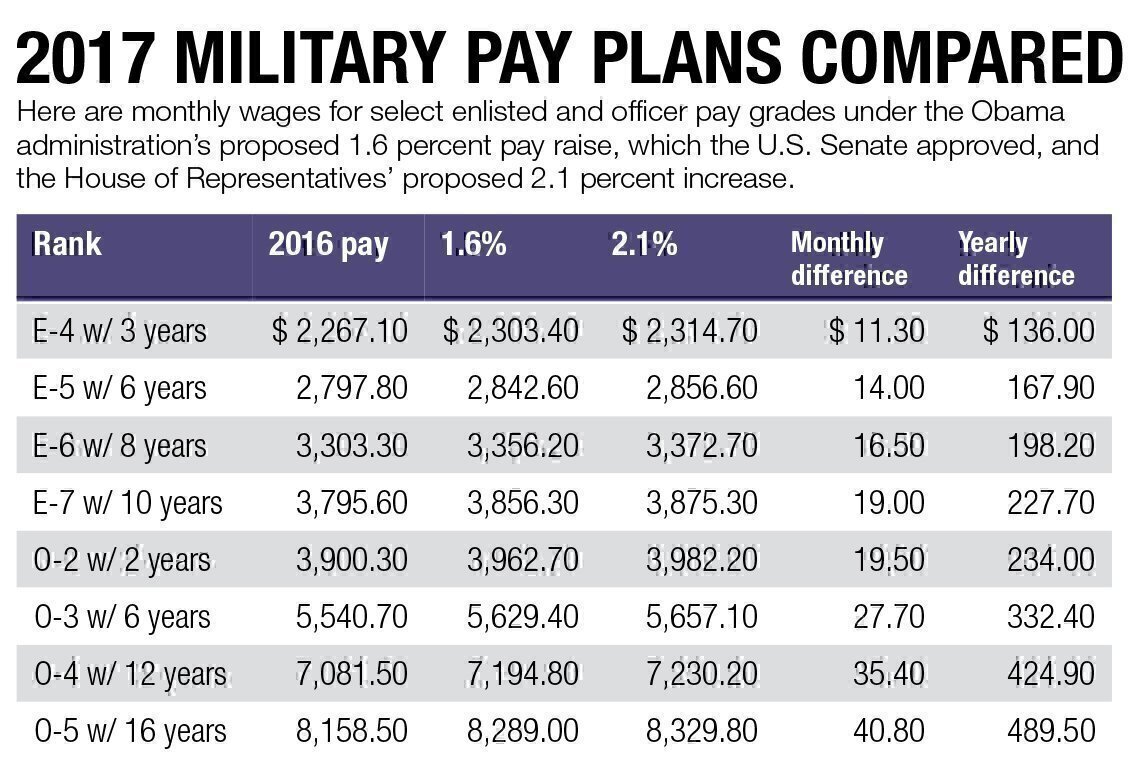 Earlier this month, Politico reported negotiators had settled on a plan which would have included $9 billion in extra overseas contingency funding for the fiscal 2017 policy bill, including money for the bigger pay raise.

But Obama has threatened to veto such plans in the past, and House Democrats pushed back on the report of a finalized deal.

Lawmakers are hopeful that defense budget policy bill will be finalized before the continuing resolution plan, and that the final pay raise decision can be included in the trillion-dollar-plus budget extension.

Outside advocates have argued that while the 2.1 percent pay raise amounts to a small bump in troop’s annual pay, it represents a significant message to service members about the government’s attention to their family finances.

But Pentagon planners have said the small annual trims in expected pay increase are being used to offset decreased spending flexibility in other training and modernization areas. The 0.5 percent pay increase difference is expected to save the Defense Department more than $2.2 billion over the next five years, money they say is being reinvested in keeping the force strong.

Lawmakers will return to Capitol Hill on Nov. 28, and are expected to spend the next three weeks finalizing measures like the authorization bill and continuing resolution before ending the legislative session.

But Republican leaders have argued the short-term budget deal will allow more flexibility in planning for incoming President Donald Trump. The continuing resolution is expected to run through March 2017, meaning lawmakers will likely be finalizing the fiscal 2017 federal budget and planning the fiscal 2018 budget at the same time.

Leo Shane III covers Congress, Veterans Affairs and the White House for Military Times. He can be reached at [email protected]

The Incredible Truth of Thanksgiving

4 Ways to Let your MadSkills Shine

4 Ways to Let your MadSkills Shine