New York (CNN) Bombings in New York and New Jersey over the weekend — as well as the discovery of several unexploded devices — have led authorities to believe there may be a terror cell at work in those two states, law enforcement officials told CNN Monday.

And a manhunt is under way for 28-year-old Ahmad Khan Rahami after New York police identified him as wanted in connection with the bombing Saturday night in New York’s Chelsea neighborhood, which wounded 29 people.

Earlier Saturday, a garbage can exploded near the starting line of a Marine Corps charity run in Seaside Park, New Jersey.

And on Sunday night, a backpack with multiple bombs inside was found in Elizabeth, New Jersey. As authorities tried to investigate, one of those bombs exploded.
The series of attacks come as New York hosts world leaders at the United Nations General Assembly this week.
Here are the latest developments:
— The FBI described Rahami as a U.S. citizen of Afghan descent with a last known address in Elizabeth, New Jersey — the same city where an explosives-laden backback was found Sunday night. 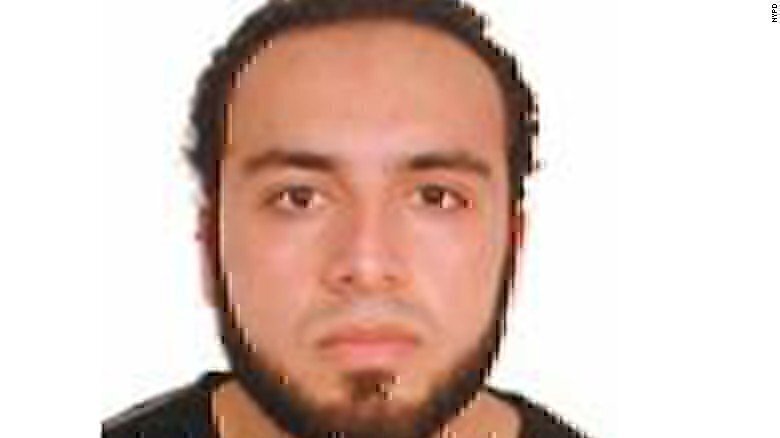 Rahami is about 5 feet, 6 inches tall and weighs about 200 pounds. Rahami has brown hair, brown eyes and brown facial hair.
— New York Gov. Andrew Cuomo said Monday the bombs found over the weekend have similarities, suggesting “there might have been a common linkage.” He said the investigation is ongoing, and he “wouldn’t be surprised if it zeroes in on a particular individual, today even,” and he “wouldn’t be surprised if we found a foreign connection to the act.”
— A federal law enforcement official said BBs and ball bearings were among the pieces of metal that appeared to be packed into two pressure cooker bombs in New York. One of those devices exploded on 23rd Street, but the fact that it was partly under a metal trash container may have diminished the force of the blast.
— Surveillance videos showed the same man near the site of the explosion in Chelsea and where a pressure-cooker device was found four blocks away, several local and federal law enforcement sources told CNN.
— On Sunday night, the FBI and New York police stopped a vehicle of interest in the investigation, according to a statement from the FBI. No one has been charged with any crime and the investigation is ongoing, the statement said.

The backpack in Elizabeth, New Jersey, was found around 9:30 p.m. Sunday in a wastebasket outside a neighborhood pub — about 500 feet from a train trestle, officials said.

There was a suspicious package with multiple improvised explosive devices this evening at the Elizabeth Train Station in NJ. #Elizabeth

It contained up to five devices, Elizabeth Mayor Chris Bollwage said. The two men who found the backpack thought it might contain something valuable, but they alerted police when they saw wires and a pipe on the devices, the mayor said.

Bomb technicians sent a robot to examine the devices. As the robot was doing so, one of the devices detonated.

“The robot that went in to disarm it, cut a wire and it exploded,” Bollwage said.
The remaining four devices in the backpack will be transferred in protective cases to a local site and then will be taken to the FBI laboratory at Quantico, Virginia, Bollwage said.
Police checked all garbage cans in the immediate area, but found no other suspicious items.
Read the full story and follow updates at CNN.com.
Previous Post

The Only Deployment Playlist You’ll Ever Need

How to Avoid Being Invisible Even While Working From Home