Take What Military Life Has Taught You to the Next Level

by G.I. Jobs
in Employment
0

Attention military spouses! If military life has taught you how to execute procedures, has honed your leadership skills and convinced you that giving orders is better than receiving them—especially that last part—then the franchise life is for you.

Unlike mom-and-pop businesses, franchise owners do not have to devise a concept and build a business from scratch. Most people look for a franchise because they want a “business in a box.” Plug-and-play and just go into business and not have to worry about five to 10 years of struggling to be successful.

As a franchisee, you will capitalize on the franchisor’s experience and expertise. The franchisor has already figured out everything from the ground up, like how to build your customer base and the most efficient way to do business. In many cases, you don’t have to have training in any particular field to run the business. You do have to have good leadership skills, understand management, be very disciplined, and execute a system very well and constantly.

>>Join us on Thursday, February 23 to talk franchise!

Let’s talk about this one franchise in particular: JDog is a Veteran-owned National Military Brand  franchise that ONLY sells their franchises to veterans and their families. Getting interesting right? 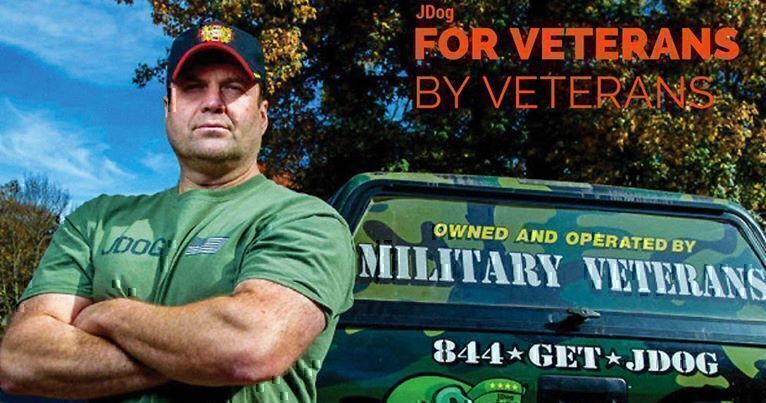 JDog has a system that gets you into business quickly, has super low start-up costs, high margins, is easy to operate, and has strong consumer demand. Junk removal with JDog  is an exciting niche that creates a great entrepreneurial lifestyle any veteran or family member will enjoy.

The JDOG  business model is based upon the premise that Americans will always support a veteran-owned business when they have the opportunity!

The junk removal business is very lucrative. But when you have a compelling, sustainable, competitive advantage –an all military veteran brand–the sky is the limit! And when you take into consideration what it costs to secure ownership and how much you can make, you’ll be challenged to find another business opportunity that offers you so much!

When you get together with the other franchise owners who understand the concept of service and sacrifice, you’ll know you are part of something very special—the JDog Movement.

On Thursday February 23, at 7:00 pm EST G.I. Jobs will be getting together with the JDog team to answer any questions you may have on how to get started.

We have invited three veteran franchisees who, at one point, were in your very own shoes—having served in the military, and later considering buying a franchise. This will be your chance to speak one-on-one with these individuals who have had success in owning their own JDog franchises.

Check out their stories below!

My name is Tyler Miller and I currently serve in the U.S. Army Reserves. I attended basic training at Fort Benning Georgia and completed my MOS 92 Fox training at Fort Lee Virginia. I attended technical school for plumbing and heating but have been a welder for the past 4 years.

My goal is to provide the Greater Berks County area with exceptional customer service, the Military way. My team of Veteran professionals will treat your home or business with Respect, Integrity, and Trust.

My name is Melissa Nichole Munoz Tobey. I was born in Honolulu, Hawaii 23 February 1981 to Bernadita and John Flaugher. Proclaimed and proud “Military Brat”, growing up I traveled from Hawaii to California, Connecticut, Guam, and New Mexico until my father retired in 1993 and we settled down in Victorville California where I finished out Middle School and High School. In 1998 my mother and father left California in pursuit of a better job in Georgia and in 2000 I followed suit.

On May 31st 2001, my dad (having retired as a CWO3) was able to swear me into the United States Navy and off I went to Boot Camp in Illinois. My ten year career as an Aircrew Survival Equipmentmen/PR consisted of three duty stations. AIMD Norfolk VA., HS-10 North Island CA, and HSM-41 North Island CA.

I had always planned, like my father before me, to retire from the Navy however, the years of living in a dual military family were taking a toll on my girls so my husband and I made the decision to end my career. On June 1st 2011 I took the uniform off for the very last time, it was a bitter sweet moment. I took up my new role as Military spouse and gladly continued my support for this country through my support for my husband’s career while raising our four beautiful children. Until July of 2012 when Ryan was injured and he was no longer able to serve.

It would take two years but, in May of 2014, Ryan was medically retired from the U.S. Navy and we moved our family to Evans Georgia to begin a new chapter in our lives. Though we remain grateful for Ryan’s current employment, we’ve never forgotten the community and brotherhood/sisterhood we left behind. You can imagine our delight in having found that same camaraderie, since joining the JDog family. That’s not even the best part! The best part is that as we grow, providing excellent and reliable service to our community, we are able to put more veterans to work! For the Tobey family, there is no greater feeling.

Andrew J. Weins and Isaac W. Weins are two brothers that have been working in the junk subsegment of the waste industry for a combined 15 years. Andrew started his first company, The Clutter Busters in April 2008. The Clutter Busters provided clutter, junk, and scrap metal removal services for homeowners, business, and realtors in the greater Milwaukee area. After working for Andrew for a number of years, Isaac bought the business in 2012 when Andrew took a position as an operations manager for a large waste company. In spring of 2016, the brothers decided to go into business together purchasing their first JDog franchise.

Andrew is a family man raising a two-year-old daughter, Penelope, with the support of his girlfriend Gazelle. Andrew and Gazelle enjoy working out, spending time outdoors, and connecting with others in the community. They are surrounded and supported by friends, family, and fellow veterans. Andrew has 12 years in the United States Army Reserves with two deployments. He is currently the rank of Sergeant First Class in the position of an Army Reserve Career Counselor where he counsels Soldiers on benefit and incentive information while helping them make career decisions.

Isaac is a creative, hands-on problem solver. For over ten years, he has been dealing in antiques, metal yard art, reclaimed furniture, doors, and windows at Maxwell Street Days flea market, through private sales, and online. While running The Clutter Busters, he used his experience in remodeling to transition the company to offer commercial dismantling and deconstruction in addition to junk removal. In the past, Isaac has been a member of various bands touring the country. He has played over 400 shows on seven nationwide tours, driving over 100,000 miles through 45 states as a musician and tour manager. He currently creates art out of pallets, metal and other reclaimed materials through his company Wynter Woods.

We’re extremely excited to get a chance to talk with these three amazing individuals, and we hope you are as well. Join us on Thursday, February 23 to talk franchise!