by Kate Dolack
in Jobs for Military Spouses
0 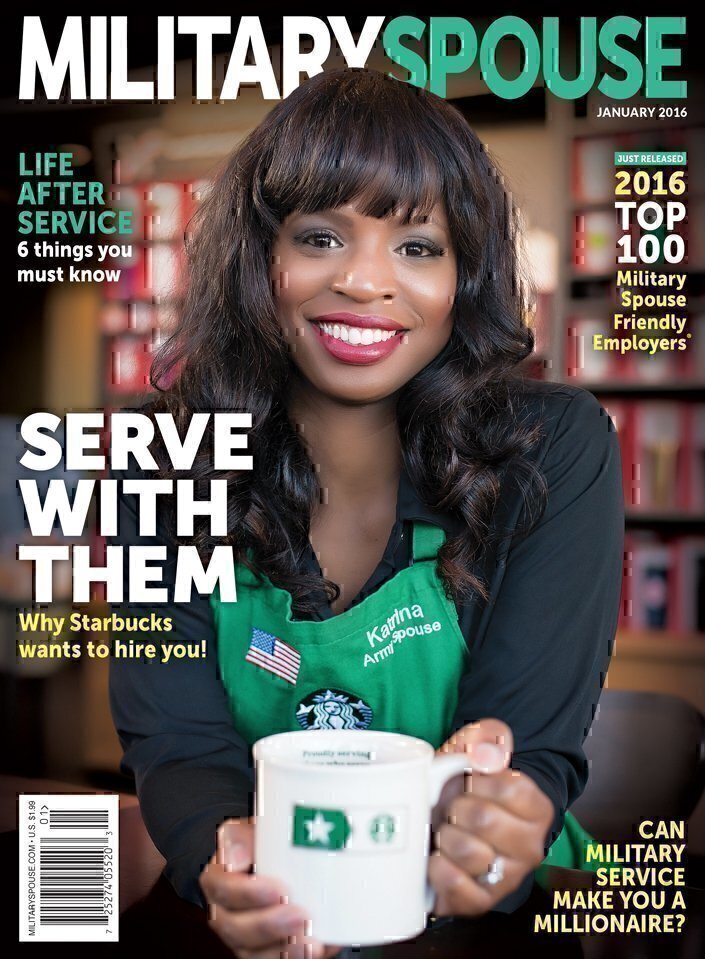 Katrina’s Story: Katrina Jackson is more than our beautiful cover model. She is also an Army spouse and nine year Starbucks partner. Like many military spouses, Katrina is balancing professional and personal responsibilities. She works at the Starbucks Military Community Store near Joint Base Lewis McChord and she is also pursuing her bachelor’s degree in mass media and communications through the Starbucks College Achievement Plan, a unique partnership with Arizona State University that provides 100% tuition coverage.

Her love of Starbucks doesn’t just stop at day’s end– she literally met her love at Starbucks. “My husband and I met in Columbus, GA. I was working at a Starbucks and he came in one night. It was a Thursday night, and I didn’t normally close on Thursday nights so that’s one reason I feel like we were meant to be. I was doing some paperwork, and when I looked up he was looking at me. I asked, “May I help you?” He wanted to know about our coffee spectrum. I educated him and before I could walk away he asked my name, which I gave. Later that night, I was doing my pastry pull when another partner handed me a note from him. He asked me out and I thought it was the sweetest thing. He came with me to church that Sunday and had lunch after. It is so cool to see how Starbucks has affected my life.”

Because of her positive experiences, Katrina is eager to share why she thinks Starbucks is at the top of the Military Friendly Spouse Employers List. “Starbucks is a great career option for military spouses. One of the most important benefits is the ability transfer to any store. The transfer process is so easy, it’s as simple as a phone call and filling out a single sheet of paper. The benefits are amazing, too! We have stock options available, health care and discounts. Even our schedules are flexible and have been a blessing so I can spend time with my husband.”

“I enjoy working for Starbucks because I enjoy interacting with and meeting new people from all over the world.”

Be A Fairy Godmother To Your Own Installation