by Katherine Gauthier
in Employment
0

It’s hard to turn around these days without seeing some sort of subscription box. You can get ones that send you everything from make-up to grilled cheese – monogrammed items to dog treats.

The SitRep Box was created by Michael Leydet, a USMC veteran that served 4 years from 2002-2006 at Marine Corps Base Quantico, Virginia. He filled many different roles during his active duty time, most notably as the training NCO for Operations Company, Headquarter and Service Battalion, and as the rifle line NCO for the Quantico Ceremonial Platoon performing military honors at funerals.

Since leaving the service, he has been involved in many different veteran focused positions and has always been a huge supporter of veteran owned businesses.

It was because of that desire to help promote other veteran owned companies that SitRep Box was born.

“I wanted to find a way to help people discover these businesses and I thought that this would be a great way to do that. Our target audience is the person who will go out of their way to help support a veteran owned business. Other veterans and military affiliated people who understand what it means to be a veteran, are the best customers because they are loyal and get excited about other veterans succeeding in both business and life. We get each other, so we support each other.”

I was lucky enough to get my hands on the first couple of boxes that went out and I promise it was worth it! 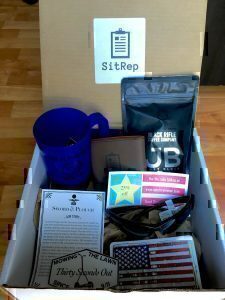 Decals from 30 Sec Out 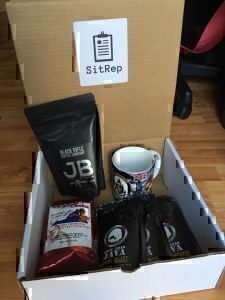 This box was my favorite.  But that could be because I have a coffee addiction that could rival a Gilmore.

Mug illustrating the Battleship USS Wisconsin
SitRep Box can be ordered as a one-time gift box if you just want to try it out, or be purchased on a monthly recurring subscription. Boxes cost $29.99 and have their own theme each month, such as the Summer of Freedom box that hit in July and the Reveille box in August.

The upcoming September box aims to introduce people to veteran breweries from around the states. Get your order placed by the 5th of the month to see what is brewing!

As the company grows, the items in the box will continue to help connect customers with more veteran owned businesses that they may not have heard of before.

Do you know a veteran owned business that would be interested in being included in upcoming boxes?

Is there a veteran owned company that you love and wish more people knew about? Let us know about it!

An Honest Confession from a Politician's Wife

4 Reasons Why MilSpouses Should Support the Feminist Movement

4 Reasons Why MilSpouses Should Support the Feminist Movement