by Guest Author
in Coping
0

“I am your worst nightmare.”

On Sept. 22, 2013, Theresa Jones opened her front door to find three military members in Service Dress uniforms, carrying with them the saddest and most impossible of news: her husband Landon, a Navy helicopter pilot, was missing after an incident in the Red Sea. The next morning she would find out he was killed in the incident. The news hit her like a freight train. Theresa was a seasoned military spouse and had developed a thick shell against fear and poise that got her through the many months of deployment. She watched Landon come and go a hundred times; never in a million years did she think she would become a widow. 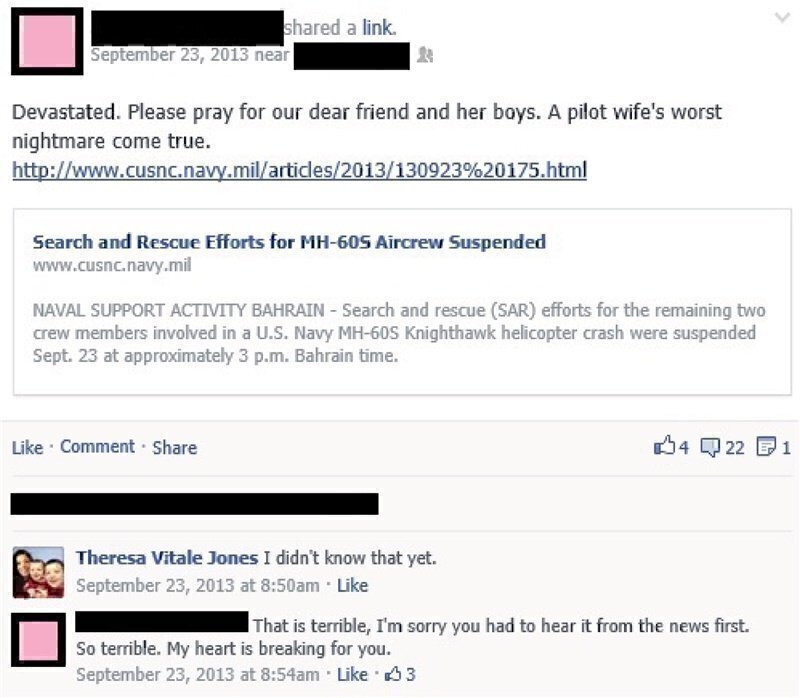 Facing a Casualty Assistance Calls Officer (CACO) is something that most of us have considered, but to survive the day-to-day we push the thought back into the deepest recesses of our brain. It is the thing of nightmares, but to survive sending our loved one off to war zones, it must not be something we consciously entertain. In a sad twist, when CACO came to Theresa’s door, she already knew why they were there. And when they returned a day later to share with her the news that her husband had perished in the incident, she already knew. Social media outpaced the official military death notification process.

Facebook and Twitter have become mainstays of research and socializing for many military families. There are official command pages, base support groups, and spouses clubs through private group pages. We list our houses for rent, look for houses to buy, research schools, and make friends before a PCS to a new area. It is obvious that for military families, social media can be a huge wealth of information and support.

Most of us are transient; the ability to get valuable word-of-mouth information through virtual strangers regarding future duty stations has taken a huge burden of the unknown away. It saves the countless hours families before us spent diving into phone books, pinning paper maps to the wall, and calling Realtors for rental listings.

Hiding in the Silent Ranks