by Michelle Aikman
in Life
1

About 10 years ago, I heard that one of my schoolmates died during service. I remembered him clearly; he was a quiet, nice guy. I didn’t know he went on to join the military and I was even more surprised to learn that he was a Navy SEAL. I didn’t know much about the SEAL qualification process but I knew it was grueling and granted only to the most elite. He was obviously a very remarkable man.

I remember feeling weight on my heart. That quiet kid went on to becoming one of our nation’s most skilled warriors and recently breathed his last breath serving our nation. My heart went out to him and his family.

I knew that I should learn more about his story. He died for our nation. It was the very least I should do to honor, respect, and remember him and his sacrifice.

But the harsh realities of war were just too much, especially since my spouse was still deploying and could potentially face a brutal fate. Just knowing he died was almost too much for my heart. I just couldn’t bring myself to know the nightmare he probably faced before his death.

I stewed with this decision at a time when my life felt overwhelming. My mother had just passed away from a terminal illness, I was expecting my first child, and we were still getting used to military life with frequent deployments—my cup was overflowing.

The years went by but I always thought of him whenever I was confronted by fears of my husband’s safety in the war zone. I still did not know what happened to him but I knew it had to be bad—it always was. 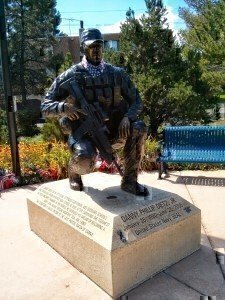 A few years ago, my husband was reading a book and I happened to see a name that caught my eye—it was my schoolmate! I could not believe it. There was an entire book about him. I just could not bring myself to pick the book up to read it myself. I still was not ready to hear his whole story. It was not long after that the movie, Lone Survivor, came out. I just could not do it.

A couple months ago, I went back home. I decided I needed to go see a monument that our hometown community had built in his honor. I expected it to be at the city center near the police station and the historic main street. It was not there. Not one of the passersby we stopped had heard of it. I was shocked that such a hero would not be known far and wide across our town.

After an hour of searching, we finally found it. Just a block away from our school, it was tucked into a small corner lot just off an unassuming road.

The large bronze statue took my breath away. It was such a beautiful tribute. I sat in front of it on that beautiful day and thought about the years of life I was so blessed to live since he died. All those years, consumed with my life and only on the very rare occasion thinking about him and only in a very vague way. At that moment, I decided it was time. It was time for me to learn more about his journey to fully honor him. It was my duty as a schoolmate and as an American.

When we returned home, I told my husband I was ready to watch the movie. It was hard to watch something that I knew was based on reality. Based on someone I knew personally. Based on the real-life nightmare that these men faced and that their families obviously know.

I am changed forever. Opening my eyes and my heart to their story may have fueled my fears and nightmares but more so, I found unending respect, appreciation, and gratitude for them and so many of the other service members who give and would give equally. I am finally at a place where I can truly honor and respect. Not because I saw the horrors but because I finally opened my heart.

Although I never want our everyday lives to be about the horrors that exist in the war zone, I never want to forget that they have occurred or that they continue to occur. When it is happening so far away from our homes and our everyday lives, it is so easy to keep distant and shield ourselves from the realities. Sacrifices happening far from our eyes often fade silently for all but those who continue to feel a void because they knew and loved them.

May we all remember those who have given so much so that we may live a life of freedom. We are forever indebted to you for facing our adversaries for us. May we all step up to maintain our freedoms in honor and respect of all of those who made it possible for us.

The Truth About Sex After Homecoming

Masculinity in the Military

Masculinity in the Military

Don’t Give the Grinch an Inch of Your Holiday Time

Dear Military Spouse, I Know You Did Not Actually Know What You Were Getting Into

Milspouses Are Giving Back This Season – And You Can, Too!