Those who have read Suzie’s column in this Military Spouse magazine, who have met her, who have listened to her lilting Southern accent, who have heeded her advice, who have looked up to her and who consider her a mentor might be surprised to learn her early days as a military spouse were not the happiest of times. After all, we know Suzie today as a formidable woman who goes to bat for all military spouses and takes them under her experienced wing. We know the Suzie who opens her home to the community and who will spend hours making handmade cards to brighten the recipient’s day. We know the Suzie who encourages and applauds us all and the military lives we lead.

But, really, Suzie isn’t so different from any of the rest of us. She and her husband, retired Air Force Chief of Staff Gen. Norton Schwartz, wed 36 years ago on a Saturday, spent Sunday driving from Little Rock Air Force Base to Hurlburt Field in Fort Walton Beach, Fla., and he reported to work at 5:30 a.m. on Monday.

Marriage is a learning curve for couples, and for the individuals comprising that couple. “For the first five years, he didn’t understand what being married meant; it was all about his career,” Suzie says. “When you marry a young captain, that’s what he did.” Suzie grew up in an Air Force family so thought the adjustment from military brat to military spouse would be easy. “But being a brat is very different,” she says. “You go to school and have immediate friends. Being a spouse, you have to work harder at being a friend. It wasn’t the most happy time for me actually.”

Suzie left a teaching job in Little Rock when they moved to Florida, and finding a new job wasn’t easy. “The first year I didn’t work. I struggled trying to keep busy,” she says.

“Then I was invited to an Officer’s Wives Club event. I didn’t want to go because that’s what my mother did and I thought I was the new and improved military spouse with a college degree and a career, but my husband encouraged me to attend.” That event led to meeting a lifelong friend, and gave Suzie a flicker of hope.

“I realized I might not be able to have the career I wanted to have, but I could make friends,” she shares. 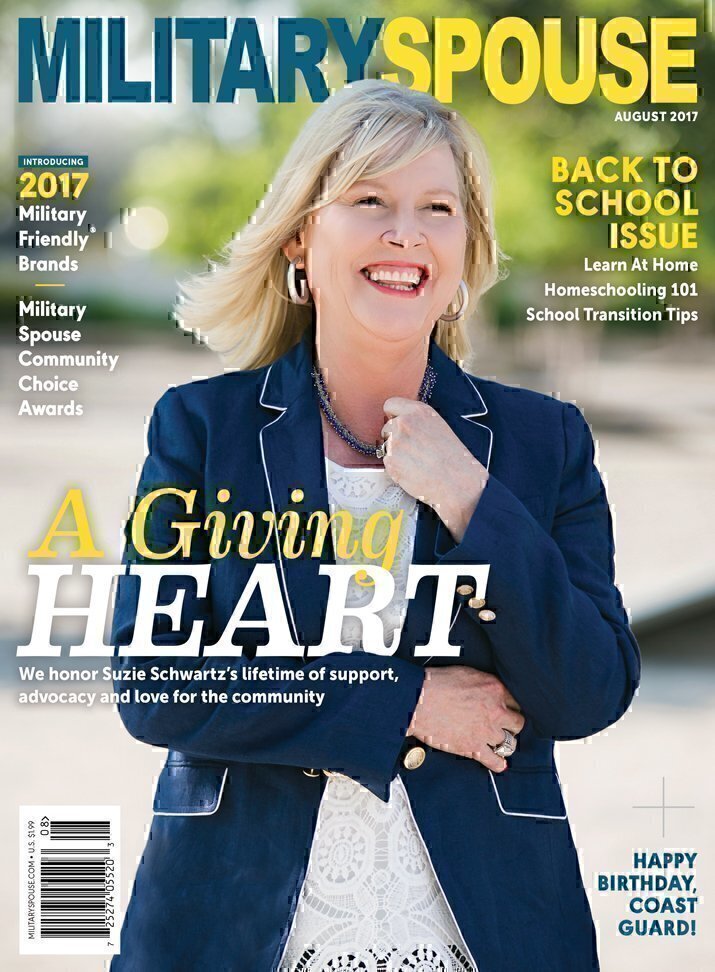 Get your Military Spouse Digimag – this magazine right on your phone

Through Suzie’s lifelong involvement in the military, she’s noticed the top three issues military spouses face are education, career and medical benefits. The ranking might vary, but those three remain the top issues.

As many military spouses have, Suzie struggled in her employment journey. Her special education degree led her to teaching in Arkansas before marriage, and then at a Catholic school the second year they were in Florida. A PCS to Washington, D.C., however, altered her path.

“I tried getting a teaching job, but it wasn’t easy,” Suzie says. “All my life I’d gone to school or been a teacher. I couldn’t figure out my skillset so I became a bank teller. About two weeks in, I was robbed at gunpoint. The robber jumped behind the counter and I was down on the floor with a gun to my head while they entered and took money from all of the drawers. The FBI came. The next morning I drove back to work and out of all the employees in that bank, I was the only one who returned. I was rewarded, got a promotion, went to corporate headquarters and never had to work in a bank itself again.” Suzie spent 2½ years with that bank before moving to Joint Base Lewis-McChord.

Although expected not to work, Suzie was bored and began a career with catering in the hotel industry, which she continued with Hyatt when the couple PCSed to Washington, D.C. Then Lt. Col. Schwartz spent two years in Germany while Suzie opted to remain stateside to further her career. “At the time it was really hard for us, but it was the best decision,” she recalls. “I was able to establish myself in the Hyatt Corporation and it led to me being hired two more times by Hyatt. I had succeeded and it gave me choices.”

Hey You, Military Spouse, You CAN (and should!) Say No...