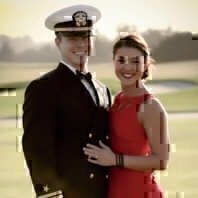 Tell us a little bit about you! I may be a “newer” military spouse but that doesn’t mean I don’t know about the military. From my cousins who are active duty Army JAG Officers, uncle who was a fighter pilot for the Air Force in Vietnam, great-grandfather in the Navy as a gunner in WWII, grandfather who was part of the Royal Canadian Air Force and finally my other grandfather who served in Korea as a Marine– the meanings of patriotism and sacrifice were drilled into me and played a role in meeting my husband.

I attended Arizona State University as an Alpha Phi where I received my B.S. (Cum Laude) in Justice Studies: Pre-Law; minor in Political Science: International Relations, National Security and Terrorism with a focus in Military Science.  I worked as an intern at Tempe Police Department as a Tactical Crime Analyst attached to the Criminal Investigations Bureau – Homicides and Cold Case Sex Crimes where I won the “Outstanding Service Award”. I joined Target Corporation as an Investigations Technician in Arizona.  Shortly thereafter I was promoted to the role of Global Crisis Management Specialist at Target Headquarters in Minnesota, where I became part of the Military Business Council and led Target’s United Way campaign in 2012-2013.

During my time with Target, I worked with the public and private sectors, all of whom were surprised to hear I was a military spouse.  When I would ask why it was a surprise, the trending answer focused around the fact that I move so often and didn’t think I would have time to establish my reputation. By having these conversations (and proving them wrong), I learned that so much of what they look for in their employees (i.e. passion, pride, professionalism, flexibility) is what military spouses embody to the fullest extent.

Currently, I am Publicity Chair for the Military Spouses of Newport, as well as the Command Ombudsman for the Surface Warfare Officer School (SWOS).

I love volunteering with organizations such as Habitat for Humanity, Toys for Tots, United Way, Feed My Starving Children, National Night Out (NNO) and Shop with a Cop (received a “Gratitude and Proclamations Award” from Watsonville Police Dept.), the local collegiate Alpha Phi chapter, local law enforcement agencies where I received the “Outstanding Service Award.” I have just begun my journey with Team Red, White and Blue and excited to stay active with veterans, active duty and supportive local communities.

What is one thing you would want to accomplish with the MSOY title? Companies tend to underestimate the contribution military spouses can make, no matter how short a time they may have in a given area. I want to change this opinion of businesses who only see the “moving date” when they meet a military spouse. Military spouses deserve the opportunity to showcase the amazing talents that they can provide a company.

I would love to establish or work for an advocacy group that educates companies about the superior talents spouses encompass and promotes the creation of this type of job opportunity. Doing so could allow a greater number of military spouses to have a career, while still meeting their familial obligations, and at the same time provide a more diverse and robust workforce to local and national business. To paraphrase President Reagan, “Fellow military spouses, tear down these walls!