The American Military Partner Association (AMPA) played host to nearly 600 LGBT service members, spouses, veterans and allies at their 5th Annual National Gala on May 12 in Washington D.C. – THE largest LGBT military event of the year.

AMPA is the nation’s largest organization of LGBT military families and allies, with over 50,000 members and supporters around the world. The evening was spent honoring and celebrating America’s modern military families for their dedication and sacrifice, with a few bonus surprises throughout this must-attend event.

Here are 5 of the many memorable moments filled with esprit de corps at the 5th Annual AMPA Gala:

1. A Message from the 75th Secretary of the Navy

The Honorable Ray Mabus recorded a video message for gala attendees and supporters of AMPA. He spoke about the importance of diversity, inclusivity and equality in our nation’s military and recalled an encounter he had with young Navy Corpsman during a visit to Kyrzakhstan. The Navy medic was gay, had served in the Navy for 11 years and was just finishing his third combat tour with the Marines. He thanked Secretary Mabus for his efforts to repeal DADT and told him that his biggest fear before then was that he would be outed and kicked out of the Service that he loved. “He had three combat tours, yet THAT was his biggest fear,” said Mabus. 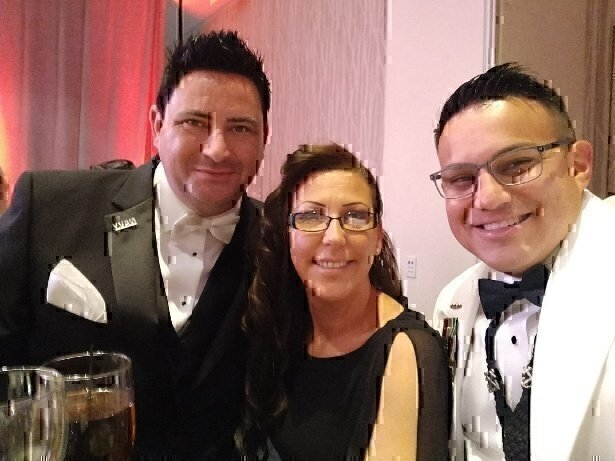 AMPA announced the launch of a brand new initiative called MilPride; a program designed on the education, support and advocacy of our nation’s LGBT military kids. This ground-breaking program will be led by the mothers of two transgender military kids and will be centered on making sure no matter where the service takes them, LGBT military kids will never be alone.

With more than 35 years of service, Retired Army Col Sheri Swokowski, AMPA’s featured speaker, is the most senior transgender veteran in the nation. In addition to highlighting LGBT community’s strides over the last year’s efforts, she also highlighted the challenges our transgender military members are currently facing and spoke of perseverance and unity throughout the ranks. “Transgender people have been serving honorably since the Massachusetts Bay Colony militia in 1863,” said Swokowski. “We’ve served in the past, we’re serving now and we’re going to be serving going forward. The military taught us how to fight, so they shouldn’t be surprised when we do.”

At last year’s gala, AMPA launched their Military Spouse Scholarship program. In partnership with Hilton Hotels, AMPA was able to award scholarships to five deserving military spouses. The next round of AMPA military spouse scholarships just went live, and is open to ALL military spouses, regardless of sexual orientation or gender identification. That includes spouses of active duty, reserve, retired, and more! Recipients will receive scholarships in the amounts of $1,000-$2,500, and the application period will close on June 15. Apply today!

5. The State of AMPA

Ashley Broadway-Mack, President of AMPA, gave the annual State of AMPA address. “We are facing battles that many of us thought we had already won,” said Broadway-Mack, referring to the transgender military ban. “We’re just a bunch of military families, but I think we all know that there’s hell to pay when you mess with military spouses and their families.”

Broadway-Mack highlighted the united community the military has, through AMPA’s education advocacy and support. “We are gay, lesbian, bisexual, transgender and yes…ALLIES TOO,” she said. “If your family services this country, then AMPA is here to support you too.”

To view the rest of the AMPA Gala festivities, check out the Facebook Live stream below. #OneTeamOneFight #AMPAGALA18