5 Ways Your Civilian Friends are Different from Your Military Friends

by Ashley Frisch
in Friends
0

No one understands the ups and downs of military life like your military “framily” does, and because of that they will always hold a special, cherished place in your life.

That being said, I have to argue that having civilian friends are just as important and that they too hold a special place in your life that no one else can infringe upon.

Here are a few special ways civilian friends are different from military friends:

1. Your civilian friends have no idea what your military spouse does and that can be incredibly refreshing.

When you get together with your military friends, you’re likely going to talk about your military spouse’s work, coworkers and the latest military gossip at some point. Your civilian friend has a very limited idea of what your husband or wife does in the military, no idea who they work with and doesn’t care about the latest military gossip, and that can be a wonderful thing. Sometimes you need to just be a separate person from your spouse and sit down, have some coffee and talk about the weather.

2. Your civilian friends are not leaving. 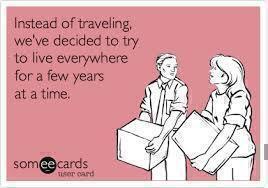 You are at some point, but they typically stay put. As sad as it is to leave your civilian friends every few years, it’s nice to know they’re not PCSing anytime soon and they’ll still be there for you to visit when you leave.

3. Your civilian friends give your military spouse a chance to feel like a civilian.

Although our civilian friends respect my spouse’s work, they don’t view him as a rank or rate, they just view him as himself and I know he appreciates the break they give him from the military world. Sometimes he just wants to be that chill guy that’s great at BBQing and nothing else.

How Much is Too Much to Tell Your Spouse During Deployment?

Hometown Hustle: How to Handle the “You Just Come See Us” Convos When Traveling Home for the Holidays

How to Love Your Socially Anxious Friend