Why We NEED to Be ‘Bad Moms’

by MJ Boice
in Entertainment, Parenting
0

I have been inspired. I have seen the light. I once was blind, but now I see and it’s ALL thanks to a new movie called Bad Moms, which made its big screen debut on July 29.

Four of my neighborhood gal pals and I were all in a DESPERATE need of time away from parental and work responsibilities. So we climbed into my awesome mom-mobile and headed to the theater for a ‘Mom’s Night Out’ on the evening it premiered.

This film did NOT disappoint my friends! It was almost as if someone had hooked my brain up to a machine, recorded my dreams, reality and worst nightmares…and then somehow made sense of it all by producing the MOTHER of all Mama Blockbusters!

The premise of the movie mirrors many of the challenges that most mothers have, but had the exaggerated benefit of being spot on when you pile Mil-Life into the mix. 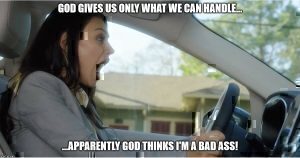 Amy (Mila Kunis) is your typical mom (whatever that means!). She works, drives her kids all over creation, cooks, cleans and even tries to make the effort of doing the PTA gig. She’s forgetful, often late and pretty much runs ragged on the daily. Between her kid’s extra-curricular activities, her job and her (not quite helpful) husband, she’s a hot mess just trying to stay afloat.

(Sound familiar yet? Yea, I thought so!)

3 Non-Scale Victories to Measure During Your Weight Loss Journey

3 Non-Scale Victories to Measure During Your Weight Loss Journey

Is Overcommitment Negatively Affecting Your Family?