by Military Spouse Team
in Fashion
0

The lights dim and the spotlights come together on two women clasping hands, anxiously awaiting the results in an envelope. After all the hard work, it all comes down to one moment in time.

Carefully, the emcee opens the envelope, takes a deep breath and announces the new Mrs. Kansas 2015 as Samantha Reinecke! Among those cheering and clapping is her husband Shawn, a technical sergeant in the Air Force Reserve. Samantha is a wife, a mother, student, teacher and a beauty queen who is using her life to bring awareness and advocate for military families and adoptive families in the state of Kansas and across the country. 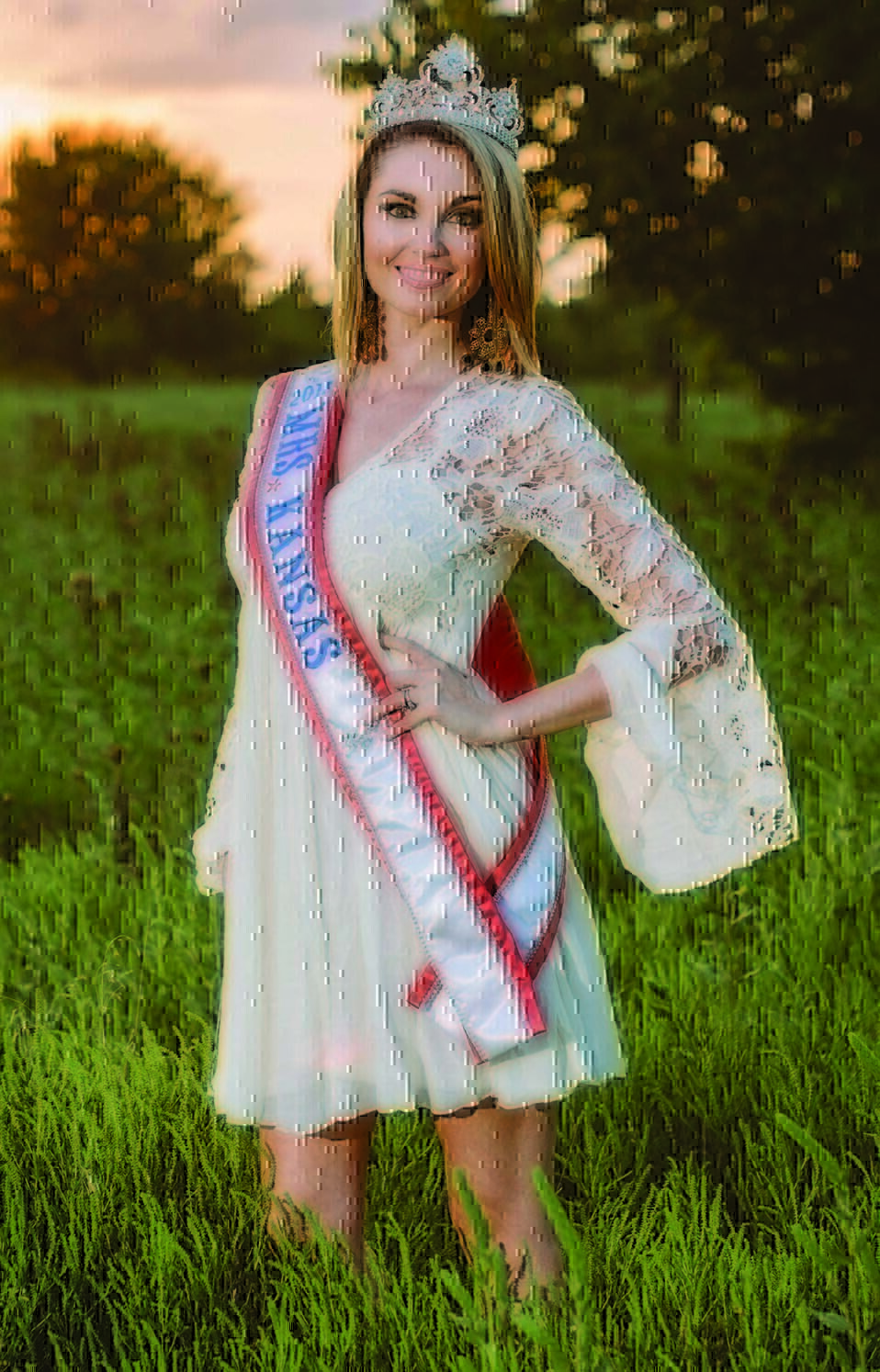 unique of military stories. In 2002, the former Miss Kansas Teen competitor was headed into her junior year of high school. She met Shawn Reinecke, who had just graduated and was getting ready to head out to boot camp. In July 2007, after a long-distance relationship, they married and Samantha’s journey as a military spouse began. Her pageant life, however, seemed to come to an end.

The dreaded “Murphy” made his appearance not long after they returned from their honeymoon. Samantha accepted a position as a teacher in their hometown, expecting that soon her husband would be separating from active duty to join the Reserve. Going back to a long-distance relationship for the short time he had left on active duty was nothing.

Except in true military life fashion, Samantha discovered she was pregnant just as a deployment loomed. Samantha signed a contract for her new job, and thus was forced to make a choice many military spouses make: stay put or give it up? Samantha chose to stay while her husband was assigned to Alaska. Their daughter was born the next year, and in 2009 her husband left active duty and joined the Reserve.

As a military spouse, Samantha wished to be involved with the military community while her husband was gone, and that meant finding a way to give back to her fellow spouses and their families. While searching for opportunities with the local USO she happened upon the Mrs. United States Program. She was interested, as once she was married she accepted that chapter of her life had ended.

“I was a brand new military spouse and wanted so badly to do my part to help serve, but had no idea where to begin. The Mrs. Kansas pageant was a way to get my foot in the door on a national level.”

When choosing her platform for her first competition she knew immediately that she would focus on the USO.

“My husband and I had only been married a few years and we had one child. Military life was what I knew, so it just made sense to share that knowledge with others.”

As Mrs. Kansas 2010, she used her title to bring awareness to the military life in her community, and shared her story of being the wife of a Reservist. This was especially important to Samantha in her role of mother. The Mrs. Program celebrates the whole woman—her independent achievements, motherhood and being a wife. They are powerful and inspiring women in all walks of life. Even during the pageants where she does not place, Reinecke says of sharing with her daughter,

“Those pageants are just as important for her to watch, because it gives me the chance to teach her to be gracious and thankful for what God has given her, and to know that he always has a plan for our lives.”

Her second time competing for Mrs. Kansas 2015, Samantha chose a different platform, one that had as much meaning to her as her previous platform. Of the Reinecke’s four children, one is adopted. During the delivery of their first child Samantha experienced severe and life-threatening complications that might make it unsafe and risky to have any more children.

After a long waiting period, and then even more waiting because of secondary infertility, they turned to the option of adoption. Samantha and her husband felt strongly that their family was not complete and they had experience with adoption— Shawn was adopted by his 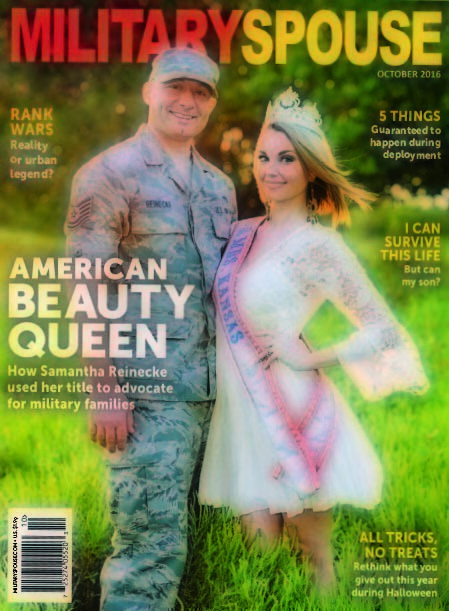 Less than a week away from their adoptive son’s birth Samantha became ill. “On a whim, I took a pregnancy test. I was so convinced that it would be negative that I actually walked out of the bathroom and left it on the counter and forgot about it.” When she later came in prepared to throw it out she looked down and saw the positive sign. “We were adopting and I was pregnant.”

Almost a month after bringing home their new son, the first ultrasound revealed that they were having twins, and that everything was perfectly fine with her pregnancy.

Their family would grow from three to six in less than a year!

This experience forever changed Samantha and her husband. “By the time 2015 rolled around, our family dynamic had changed so drastically, and our personal experiences with infertility and adoption had completely changed me as a human.” The value of her son’s precious life had so powerfully moved them that choosing adoption as a platform seemed to be a natural choice. Samantha’s campaign then revolved around advocating for adoption and making the entire process easier.

Samantha would go on to win Mrs. Kansas 2015. She has shared her story with lawmakers who are advocates of making adoption an easier and less financially taxing undertaking.

As a military spouse and beauty pageant title holder, Samantha has learned much. She is quick to share that three deployments and four children later mean she is still learning.

She has proven that to be “just a military spouse” can mean anything you want it to mean. 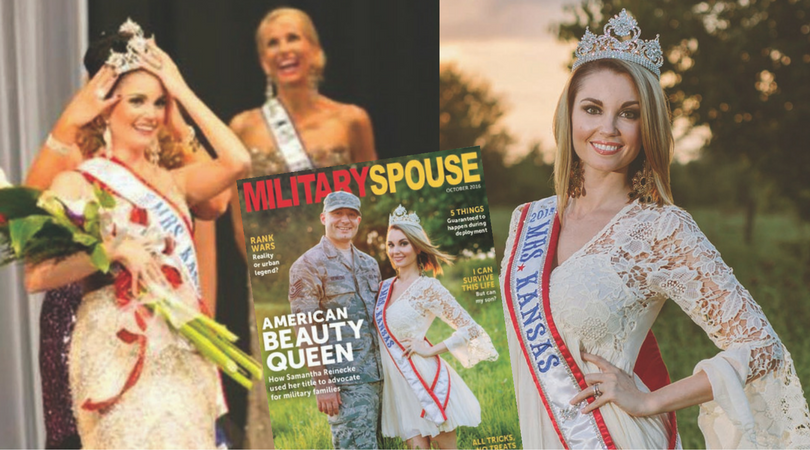 Even when he’s not wearing a uniform, Shawn’s job as a firefighter keeps him away from his family and in dangerous situations. So when a deployment date began looming, Samantha decided to take a year break from work to concentrate on her children and husband. She also took the opportunity to go back to school to complete her doctorate, furthering her career in education.

Military life may not be all rose-colored but she wouldn’t trade it for the world.

“To me and our children, my husband IS Captain America. What I love most about being a military spouse is that my husband loves me enough to share his life with me.”

And for new military spouses Samantha shares from her heart,

“Always remember this—your spouse loves at least two things very deeply: his/her country, and you. You are one of the reasons this country is worth fighting for.”

In spring of 2017, Samantha will yet again aim for the title of Mrs. Kansas USA, in the hopes of taking it all the way to Mrs. USA.

Preparing for Military Retirement: What to Know Before You Go

Miscarriage, Pregnancy Loss, and the Military

Miscarriage, Pregnancy Loss, and the Military