by Jen McDonald
in Coping
0

When a service member dies, certain procedures go into motion to support the surviving family members. From notification of death (if needed) to providing for the family’s immediate needs, the military is unfortunately well versed in ensuring that families are cared for in the initial days following a military member’s death.

But what happens to the family after the funeral, when the last visitors have gone home…when they are left to somehow cope with what must become their new normal?

Thanks to the Tragedy Assistance Program for Survivors (TAPS), there is support available. And very personal support, at that. TAPS was founded by military spouse Bonnie Carroll in 1994 following the death of her husband, Brigadier General Tom Carroll, in an Army C-12 plane crash in 1992. Out of her experience was born the mission of TAPS, which is to “provide ongoing peer-based emotional support to anyone who is grieving the death of someone who died while serving in the Armed Forces.” To date, TAPS has assisted 50,000 surviving family members, casualty assistance officers, chaplains, and others supporting bereaved military families through a peer mentoring network, online and live chat, in-person care groups, resource materials, and seminars and camps for both adults and children.

TAPS welcomes anyone grieving the death of someone who died in the military, no matter the cause. Survivors include parents, spouses, children, siblings, fiancés, and other relatives of those who’ve died.

Military Spouse recently had the chance to visit with Carole Hilton, the surviving spouse of Lt. Lawrence Hilton (USN), who died unexpectedly in 2004. Carole not only utilized the services that TAPS offers, but went on to become part of the TAPS Survivor Care Team and is on the front line offering support to others who’ve had a loss–often connecting with families within their first days of grief. We’re so grateful for Carole’s willingness to share with the military spouse community her own journey from the perspective of a surviving family member.

MSM: What would you want military spouses to know about TAPS so they can best know how to refer others who could use TAPS services and resources, or if they’re ever in need of it themselves? 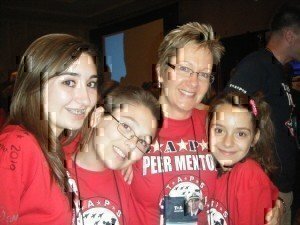 Carole: I would like military spouses to know that no one expects them to be able to provide the support that the bereaved need. As military spouses, I believe we are singularly capable of handling most things that we’re faced with. But in the case of grief and loss, the support that a fellow survivor can provide is extremely valuable and cannot be underestimated. TAPS works because it is survivors helping survivors heal. The power of peer connection sustains itself over a lifetime.

Iraq War Vet Amputee Debuts on “Dancing With the Stars”

Iraq War Vet Amputee Debuts on "Dancing With the Stars"