The Top 10 Most Haunted Military Bases

by Kristi Adams
in Holidays, Life
0 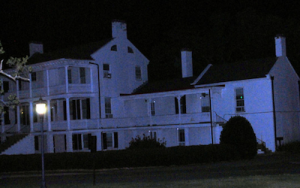 Following the assassination of Abraham Lincoln in April 1865, the arms of justice moved swiftly. After a 12-day manhunt, John Wilkes Booth was shot and killed by police, while his co-conspirators were quickly apprehended and imprisoned in the Washington Arsenal awaiting trial. Four would be sentenced to death by hanging, two others given life sentences.

One of the guilty sentenced to die included Mary Surratt, the proprietress of the boarding house where Booth and his associates developed the assassination plot. Although Surratt adamantly maintained her innocence, she was found guilty – and became the first woman executed by the U.S. federal government, with President Andrew Johnson himself signing the orders for execution.

The guilty watched from their jail cell windows as their own gallows were constructed in front of them, in the south part of the Washington Arsenal Courtyard.

The Washington Arsenal is now…none other than Fort McNair, where it is said an angry, restless spirit roams the grounds, shrouded in a dark bonnet and long black dress, melting snow in a path, as if still retracing her steps to the gallows… 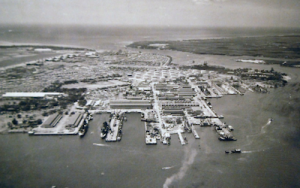 In a place that has experienced intense emotion and devastating tragedy, something is bound to be left behind.

Even before enduring one of the most tragic military attacks on U.S. soil, the Hawaiian Islands teem with stories of the supernatural. Locals warn to watch out for Pele – the goddess of fire who also has a proclivity for hitchhiking as the “White Lady.” There are the ghosts of ancient Hawaiian warriors called “Night Marchers” who drum their way across the sky during full moons, and of course, deities who guard the volcanoes, placing a curse on anyone foolish enough to take lava rocks from the Islands.

Bookended alongside the Islands’ own haunted history is the tragedy of Pearl Harbor. A total of 2,403 Americans were killed in the attack, the majority of deaths occurring in Pearl Harbor, while others occurred on neighboring installations, Schofield Barracks, and Wheeler Army Air Field. The torpedoed USS Arizona took 1,177 souls with her as she sank to the ocean floor, and still lies in memoriam.

Numerous military members have reported eerie noises from the harbor, disembodied screams, and appliances that seem to have a mind of their own. Those living in base housing have also reported mumbling voices, footsteps, and laughter, doors and cabinets that open…and close, on their own, and flickering lights, just to name a few encounters. 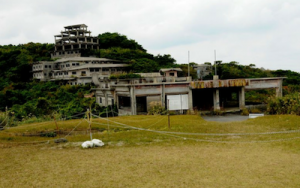 Japan frequently tops the most haunted lists in horror film and literature, and the notoriety is warranted. Tales of terror stretch back in Japanese literature to the Heian period (794-1185), in a time so ancient that stories were inked onto scrolls, known as Gaki-zoshi, or “Scrolls of the Hungry Ghosts.”

Unsurprisingly, Kadena Air Base and the surrounding military community have reported all manner of terrifying activity. Ghosts have approached one installation gate so many times, that the activity has been captured in multiple videos.

Building 2283 on Kadena was once a tranquil single-family base housing unit built next to a daycare center, until an alleged family murder took place in the home. The USO used to hold ghost tours here, until curtains parted by themselves and a landline phone – long disconnected, rang in the house in front of terrified tour groups. Before the building was demolished in 2009, the next-door daycare teachers complained that their students kept throwing their toys over the fence. When questioned, the children replied, “the little kids on the other side asked us to.”

And the hair-raising terror continues in the Kadena Hospital Caves on the Banyan Tree Golf Course. The caves were once a former bomb shelter and hospital where 350 medical staff, and 222 nursing students from Japanese military units were assigned in WWII. When U.S. Forces came ashore, the caves were…evacuated. Some evacuated by ingesting potassium cyanide pills, others jumped to their death from nearby Maeda Point.

To this day, off the cliffs of Cape Maeda, scuba divers report seeing ghosts…underwater.

It’s worth knowing that in Japanese ghost folklore, water plays a critical role as a medium in which souls can travel to…and from, the world of the dead.

So, the next time you PCS, and you hear your new staircase creaking, or could have sworn you turned the lights off before bed…you might not be imagining things. You might just be right.

Connect with us on Facebook!
This article has been modified to meet updated editorial standards at Military Spouse, which may include the augmentation of material that reflects the expertise and experiences of our staff.
Page 3 of 3
Prev123
Previous Post

Tips for the Chief Entertainment Officer: Free tickets for YOU!

5 Types of Milspouse Friends You Make on a Base

9 Things Your Milspouse Friend with ADHD Wants You to Know

MilHousing Network and the Movie Night In, has Done It Again

Hurry Up and Wait: The Dreaded PCS Build Up