by Lauren Comer
in Friends
0

Hands down, I have won the friend jackpot for my life. Through the different walks and seasons of my life, I have acquired and maintained some amazing and strong female friendships. Biological sisters and cousins that double as friends, incredible and hilarious sorority sisters that keep me on my toes (yep, the best friends I ever bought!), military sisters who support me through thick and thin, and more.

While all friendships are special in their own way, there is something especially unique about those military friendships.

What makes military friendships SO special?

Women are often depicted as self-serving, catty, and malevolent, but I’ve experienced the exact opposite with military wives. When we had a difficult time finding nice, reasonable housing out “in town” at Naval Base Ventura County, I was so hesitant to live on base. Aren’t the women who live on base so gossipy and nosey?

However, my on-base neighbors turned into close friends very quickly and definitely became my village during deployment and beyond. Whether it was letting out my dog when I had to stay late at work, going for long walks that doubled as therapy sessions, or just eating dinner and watching TV together, my military sisters were always there.

Each new duty station presents the challenge of making friends, and knowing that you will only live there for a short timeline prompts many of us to get to the task of friend-making right away. Once you find a new milspouse friend, I’ve found that those true friendships go from zero to 60 and within a few weeks you act like you’ve known each other for years!

I remember meeting my military BFF, Emily, for the first time over dinner with our husbands. In 29 Palms, making friends was no easy feat. So when I met Emily – whose kindness and beauty was evident within minutes, and with whom I shared so many interests – I realized this was my chance. At the end of dinner, I smiled and said, “OK. So we’re going to be best friends now. Alright?”

Emily laughed, probably because she thought I was a bit of a loon, and probably because she thought I was joking – but I wasn’t. From that day forward, we did everything together, starting with a hike the very next day. A year and a half later, when both of our husbands received orders to PCS to the same battalion at the same time, I was so overjoyed that I would have my best friend and confidante, Emily, by my side!

Life as a military spouse is anything but normal and looks downright crazy to our civilian friends whose lives differ in so many ways. Military friendships are built on a different type of mutual understanding. 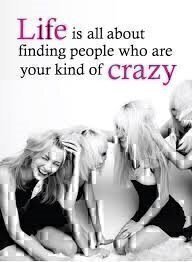 Military friends can commiserate without judgment about your detailing process, the stress of PCSing, the apprehension of deployment, and vice versa. You don’t have to explain why you can’t just pick where you want to live, or that you don’t know where you’ll be in six months, because they understand it and have lived it themselves.  Military friends “get” that you can absolutely love and hate life in the military at the same time, and understand your fears and joys more deeply.

10 Power Questions You Should Ask During An Interview