Ashlyn and Blake: When You Know, You Know

by Military Spouse Team
in Holidays
0

There isn’t much that grows in the sands of Afghanistan, but Ashlyn and Blake’s friendship certainly bloomed during a 2012 deployment. As unit buddies they bonded as friends, laughing together alongside the danger or occasional boredom.

Both in the Army at the time, Ashlyn and Blake both enlisted after graduating high school: Ashlyn in Oregon and Blake in Georgia. “I enlisted in 2007 and went to Oklahoma, Arizona and Texas.  I deployed to Iraq and came back, and then went on to Germany for two years.  Finally, I came back to Texas and that’s when Ashlyn and I became friends.  And the rest, well, the rest is history,” he says with happiness in his voice.

When You Know, You Know 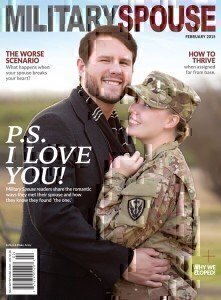 another.  One night, while they were watching a movie together and eating dinner, Blake jokingly tossed out the idea of getting married. They both laughed, but then the jokes quickly turned serious and they decided that, why, yes, why don’t they get married?

“We got married on a Thursday.  Blake called me and said why don’t we get married today?  So I called the courthouse and they said we didn’t have to deal with the waiting period because we were both military.  So we called our friends and asked them to be there.  We didn’t tell anyone else.  We showed up and signed the paperwork.  It wasn’t until our friend Amanda said, ‘do you realize it is 10-11-12?’ What a cool date!  We were so excited to get married, I didn’t even realize the date!’

Ashlyn and Blake were looking for a creative way to share the news of their nuptials with their parents.  Ashlyn’s mom flew down for a visit under the impression that they were going to actually meeting to plan the wedding. Instead, Ashlyn and her friend Amanda had planned to reveal their marriage by photo slideshow of wedding pictures taken on the day. “And so there we were watching this video, thinking it was a cute thing.  We told my mom they were our engagement pictures.  I had this sign I made out of chalkboard paint and in the last side I was holding it.  It read ‘We Eloped. 10-11-12.’  They were surprised, but my mom was so happy for us!”

Ashlyn and Blake have just celebrated their two-year anniversary, and life has changed since they first said, “I Do.”  Blake made the decision to leave the Army, while Ashlyn stayed in to finish her commitment. He recalls, “the hardest part was really, what do I do next?”  Ashlyn remains in the military, so like many military spouses, Blake was tasked with finding a job that he could take with him if they moved. Thankfully, Blake landed a fulfilling job as an IT contractor in Texas. He travels to various companies throughout the region and is settling into his new life.  “It’s fun being a military spouse as a man.  The common misconceptions thrown around about male military spouses are not true.  I was in the Army, so that helps. I know when she comes home and has a rough day.  I can relate and understand. Life today is fun, and I really love it.”

Read Next – P.S. I Love you: Military Love Stories