by Guest Author
in Employment
0

I’ve learned that the Air Force may tell us where to go, when and for how long, but that doesn’t have to mean waiting until my husband’s military retirement to fulfill my dreams. I haven’t. And, in fact, they came true because of our military life.

His dream was to become a pilot. He is.

My dream was to become a book author. Now, I am.

All I’ve ever wanted to do is tell stories as a writer. I knew my career as a journalist would be challenged by our military life – primarily the moving around and the location mandates that come with it. But, what I didn’t realize was that this lifestyle would inspire me to fulfill my one of my own ambitions while my husband fulfilled his.

My career as a writer started at the same time my role as a military spouse did. I graduated first in my journalism class from Washington State University. Armed with a writing portfolio of clips from two years on staff at the student newspaper and two summers as a reporting intern at newspapers in Washington and California, I was ready to conquer the world.

I wanted to work as a newspaper reporter at the biggest daily newspaper that would hire me, like The New York Times or The Washington Post. My stories would expose government wrongdoing, save the environment, improve education and cure disease. But I also had other big things in mind, one of which was Geoff Steeves, and the long-held dream of a life together. 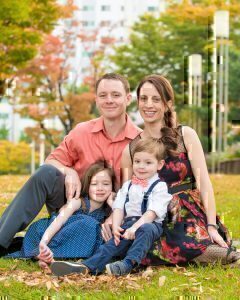 Geoff and I met at the end of our senior year in high school. (He was headed to the Air Force Academy in Colorado Springs and I, as you might recall, would be working my way toward a Pulitzer Prize.)

College graduation meant we would finally be able to start our life together, as well as begin to chase our dreams. We got married in 2003. Geoff was halfway through pilot training at Sheppard Air Force Base and I was the city beat reporter at The Times Record News in Wichita Falls, Texas.

As we moved from base to base, I worked at another daily newspaper and then a magazine. I learned to ask questions, ask even better questions, really listen to the answers and write stories. Some assignments were covering city council and school board meetings, but my articles told people’s stories, too.

When illegal drag racing was big, a photographer and I went along with a couple amateur racers to hear their story – until the cops came. When a father of four lost his second wife to cancer after losing his first wife to cancer, he told me about spending all his life caring for sick women who died. When the city’s black residents pointed out they were only in the newspaper’s crime stories and no others, I wrote a 30-part series highlighting the forgotten businesses, neighborhoods and youth programs in one part of town.

I was telling stories, just as I had always wanted to do.

We found ourselves living in Brazil and I decided to use this time to earn my master’s degree at a university there. I missed story telling and, looking around, I realized I could tell a very important one while fulfilling a long-held ambition to write a book. 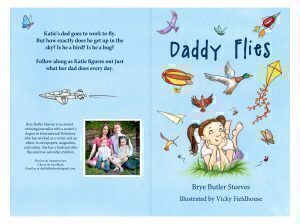 Inspired by and dedicated to our daughter, “Daddy Flies” is a children’s book about a smart girl who uses her little-kid logic to figure out what her dad does at work every day. While we were stationed at our next assignment in South Korea, “Daddy Flies” was making its way, little by little, onto the nightstands and bookshelves of military children. It’s now available on Amazon.com and I’ve participated in readings and book signings at base libraries and elementary schools.

The best part about fulfilling one dream is making room for another. At about the same time I was finalizing “Daddy Flies” and finishing my master’s program, our son was born. (It was a busy year.) So, with this new inspiration and another dream, surely some sort of book sequel is right around the corner. Just like our next move.

Brye Butler Steeves is an award-winning journalist with a master’s degree in international relations, who has worked as a writer and an editor in newspapers, magazines and online. She has a husband who flies and two adorable children. Find us on Amazon.com. Like us on Facebook. Email us at [email protected].

Military Moms’ Truck: For the Love of Food

Purple Up During a Pandemic: Celebrating Military Kids During COVID

The Strength of My Military Child with Autism

5 Celebrities Who Were Also Military Kids

Thoughts From a Military Kid Left Behind