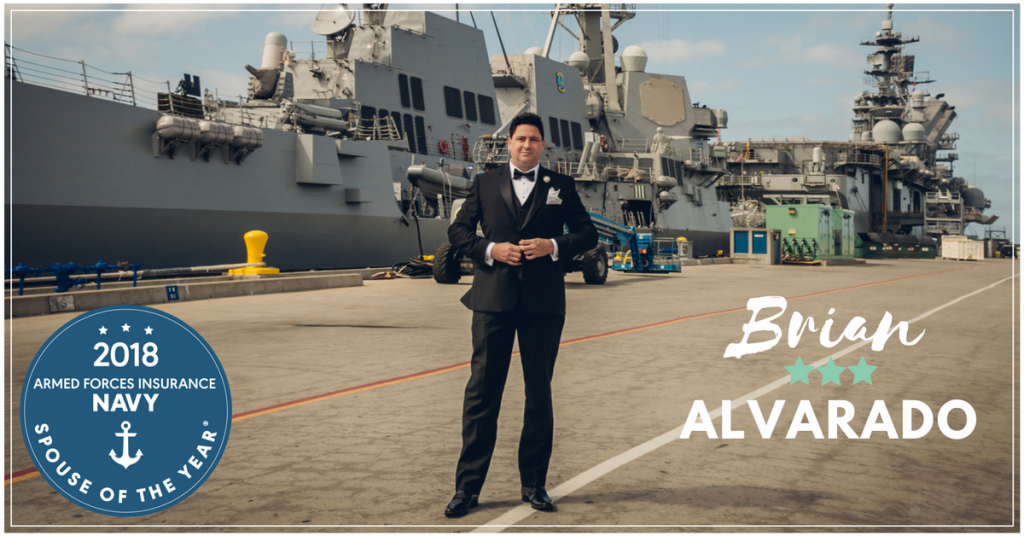 Married to: Matthew A. Alvarado

Years as a military spouse: 4

“The MSOY program was a catalyst that introduced me to a group of people within the military community that are game changers,” says Brian, who used the title to help connect military spouses with opportunities and resources.

Brian’s infectious personality and desire to encourage others meant he was nominated once again in 2018 for the MSOY award. He says becoming a branch winner was “the highlight of my time as a military spouse, only surpassed by my wedding day!”

“Having been a part of the MSOY program two years ago and staying engaged with the MSOY family since then has helped catapult the work I do in a volunteer capacity for the military community,” says Brian, who got active in the Family Readiness Group that supported his husband’s command shortly after getting married.

He worked with that organization for two years, serving as the president of the board during the final year. Brian currently serves as a Network Lead for the Hiring Our Heroes Military Spouse Professional Network, a program of the U.S. Chamber of Commerce Foundation that works on improving underemployment and unemployment in the military spouse community.

While his journey to become the Navy branch winner was one driven by his pride of service and work within the military spouse community, Brian’s journey to becoming a military spouse is something he knows was paved by individuals and groups within the LGBT community who fought hard for the equality he now enjoys. He feels their efforts mean that he now must be an active participant in the military community.

“Being a military spouse is the honor of my life,” said Brian. “I love my husband and am proud to stand next to him as he serves our nation. He is an absolute patriot and has ignited a patriotism inside of me that I didn’t really know was there.”

Brian says that it was the simple act of a hug and a warm welcome at the first military event that he attended with Matthew that gave him the ease and confidence to see all of the possibilities that exist within our community for him. He now tries to extend this same warmth to his work as a command ombudsman, in his role with Hiring Our Heroes, and to all of the military spouses who come to him looking for help and mentorship.

What he hopes to do with the award?

“I will work hard to make real change in our nation with regard to the delicate issues that face our military families. Working with organizations like Hiring Our Heroes to double down on reducing the high rate of unemployment among the military spouse community is a major passion of mine. We need to get rid of the social stigma that surrounds military spouses in the employment space. We can get this done through education, empowerment, advocacy, and lobbying.”

They have a 5 year old Beagle named Koda.

Matthew is a tried and true Trekkie. They have an entire guest room in their house dedicated to the Star Trek franchise which he has loved since childhood.

And their wedding? “The wedding invitations were messages in a bottle. Our ceremony was seaside with over a hundred of our nearest and dearest. His parents walked him down the aisle, followed by myself and my parents,” says Brian, “All guests were clad in red, white, and blue to pay tribute to our nation. Our reception was nautical themed, down to the tables being named after nautical phrases with the head table cleverly being named, The Brig!”

Congratulations Brian on being named 2018 AFI Navy Spouse of the Year!! I am so glad that you’ve been spotlighted for all of the amazing things that you’ve done and are currently doing for Navy spouses and families. Know that your adventure and reach in spouse programming is only going to expand and grow from here on out. Enjoy this moment and everything that comes, lean on your fellow branch winners, and most importantly remember to have fun this year!! Thank you again for all that you do and Congratulations! Bravo Zulu!! Go Navy! -Joy Goodrich, 2017 Armed Forces Insurance Navy Spouse of the Year

Krista | Get to Know Our AFI Army Spouse of the Year